This past Saturday, October 11, was the International Day of the Girl Child. In recognition of this day, Chinese dissident Chen Guangcheng spoke against China’s population control program on a panel at the Heritage Foundation last Thursday. 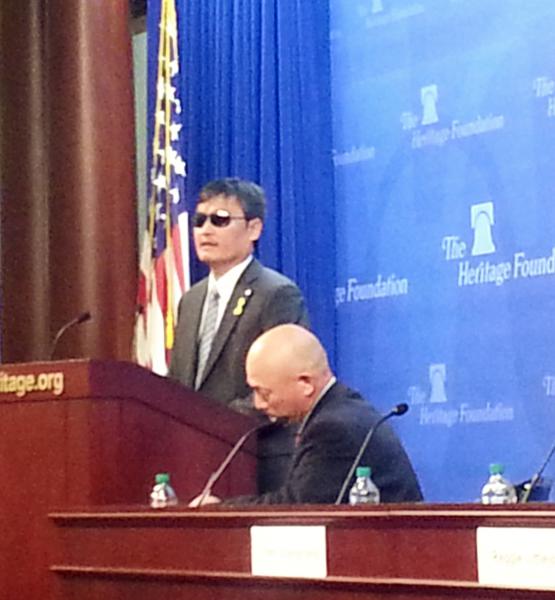 Speaking through a translator, Guangcheng called the one-child policy a “horrible crime against the Chinese people.”

Blind from infancy, the human rights lawyer wore his signature dark glasses as well as a yellow ribbon pinned to his dark grey suit in solidarity with the Hong Kong’s democracy protesters. Guangcheng grew up in China and resolutely advocated for victims of China’s Communist regime. For his opposition to the Communist party line, Guangcheng was beaten, jailed, and tortured. Under the darkness of night, the blind lawyer escaped house arrest and arrived in the United States two years ago.

Congressman Chris Smith (R-NJ) commented on Guagcheng’s legacy on Thursday, saying, “I know of no other person on Earth who has personally suffered so much for attempting to stop this cruelty to women.” Last Thursday, however, the persecuted rights activist seemed at ease and was quick to smile.

But Guangcheng had no smiles for the Chinese government. Guangcheng was seven years old when the one-child policy was instituted across his homeland, and he narrated the tragedy of an oppressed nation:

“After several decades of the one child policy implementation and forced abortion, the Chinese public lives in an atmosphere of scared fear from their government. . . And the one-child policy and the implementation and its propaganda have demoralized the Chinese society and switched from a society which valued life so much, to a kind of social decay, and they look down and have a kind of contempt for the individual life and the human being there.”

In addition to a broad description of population control, Guangcheng also gave personal testimony about conditions in his native homeland, describing a young couple who was pregnant without a birth permit. According to Guangcheng, the couple was put into a truck, where the man was beaten and the woman was forced to undergo an abortion. He said the couple “was left hopeless.” Guangcheng said this couple was “just one of tens of thousands who suffer inhuman treatment.”

Reggie Littlejohn, the founder of Women’s Rights Without Frontiers, also spoke on Thursday to decry the one-child policy. Littlejohn said: “this is the hallmark of communist regimes: the peacetime killing of their own citizens. China’s one-child policy causes more violence against women and girls than any other official policy on earth and any other official policy in the history of the world.”

Representative Chris Smith also condemned the one-child policy as, “state sponsored violence against women and children.” Representative Smith highlighted that the Nuremberg tribunal properly labeled forced abortion as a “crime against humanity,” and that the one-child policy is, “the Chinese government’s barbaric attack on mothers and their children.”

“In ancient Chinese culture we have a saying that your home is your castle, and even the king will not be allowed to come in without my permission, but now in today’s China under Communist rule, that they even put their hand into your body and grab your babies out of your womb, and they kill your babies in your face.”

He concluded with a call to the audience and to “all people of conscience” to “stand up with the Chinese people and end the Communist (rule) in China.”