Q: What is population control?

A: Population control is any top-down policy which controls people’s reproduction as a means to achieving some other policy goal. Some of these policy goals may be good (“to improve the economy”) and some may be intrinsically wrong (“to reduce a minority population”), but treating people’s reproductive lives as mere tools to help achieve policy goals is always wrong and misguided. The end never justifies the means.

Population control is coercive, violating a person’s will.

Population control is unscrupulously manipulative, violating a person’s right to informed consent and a couple’s right to freely decide upon their desired family size.

See our Table of Abuses by Country.

Q. Are there specific violations you can cite?

A. Yes, we have documented over 180 violations in over 50 countries.

Q. When did population control begin?

A. Many point to Thomas Malthus as the intellectual god-father of the population control movement.  In 1798, Malthus wrote An Essay on the Principles of Population, stating:

“Must it not then be acknowledged by an attentive examiner of the histories of mankind, that in every age and in every state in which man has existed, or does now exist:

That the increase of population is necessarily limited by the means of subsistence.

That population does invariably increase when the means of subsistence increase.

And that the superior power of population it repressed, and the actual population kept equal to the means of subsistence, by misery and vice?”

Eugenics entered the mainstream worldview of the social elite in the late 1800’s with the advent of Francis Galton and genetic sciences. At the time, population controllers defined which populations needed to be controlled by their presumed intelligence and their sexual practices, targeting the “unfit” and “perverse” for sterilization. Compulsory eugenic laws were passed in Europe and the United States throughout the 1900’s.

With the end of World War II and the horror over the Holocaust, eugenics lost much of its popular credibility, although several American states kept their compulsory sterilization laws on the books.

When the world population was growing rapidly, Paul Ehrlich published a book in 1968 through the Sierra Club titled The Population Bomb. Ehrlich predicted massive famines from overpopulation in the next decade, writing “There are only two kinds of solutions to the population problem. One is a “birth rate solution,” in which we find ways to lower the birth rate. The other is a “death rate solution” in which ways to raise the death rate—war, famine, pestilence—find us.” He then concluded, “The problem could have been avoided by population control.”

The Population Bomb sold over four million copies, and the academic establishment adopted the view that low fertility was a prerequisite for development and modernization.  Vast amounts of money began pouring into population control programs. Those couples or persons who desired to have a large family were viewed as threats to societal progress.

As the hysteria mounted, money from both public and private sources poured into the programs. So, too, did coercion: India suffered under a mass-sterilization program from 1975–1977 during which 9 million persons were forcibly sterilized. China instituted its one-child policy in 1979. Peru forcibly sterilized hundreds of thousands of impoverished women in the mid 1990’s.

A. The one-child policy refers to the Chinese government’s policy of strictly limiting the reproduction of its citizens. The policy began in 1979 and has been in force for over 35 years. It is, both in terms of the sheer numbers of people involved and in terms of the audacity of its goals, the largest social experiment the world has ever seen.

Q. How is it enforced?

A. In order to give birth in China, you must have a valid, government-issued birth permit. Women who conceive a child without a permit are coerced into abortions. Such couples additionally run the risk of losing their jobs, their house, or even their freedom, since they are often incarcerated in family planning jails. Even if an “illegal” child is born, he or she is not allowed to register with the government as legal citizens. Such “black” children, as they are called, grow up as illegal aliens within their own country, denied access to public schools and medical care.

After women have their permitted number of children, one or two, they are then sterilized.

Q. Is it still enforced?

It used to grow slowly—then it didn’t. 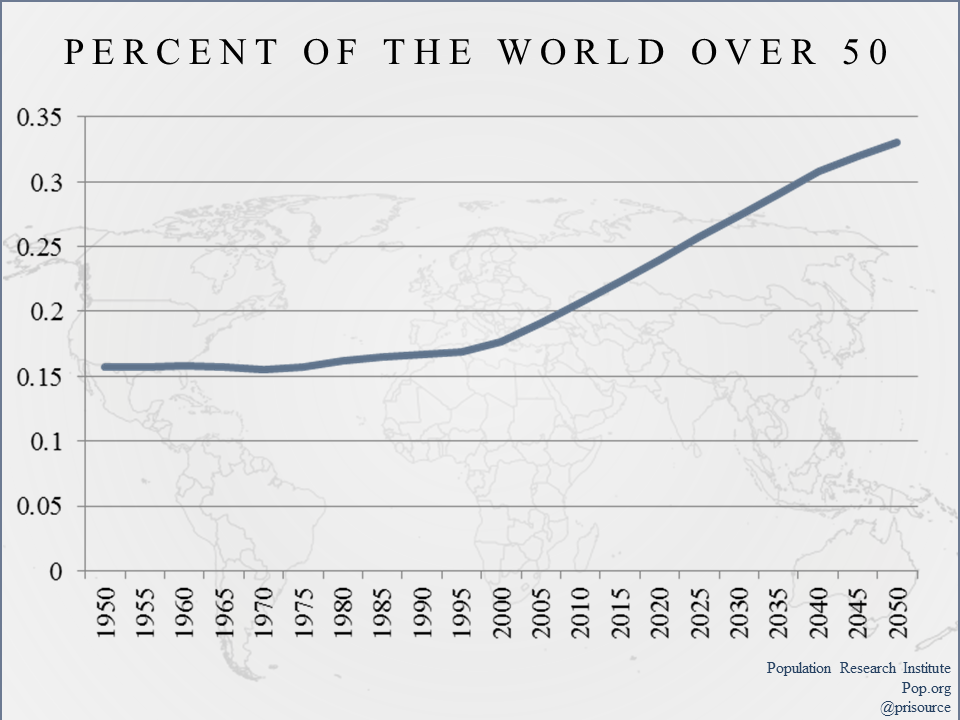 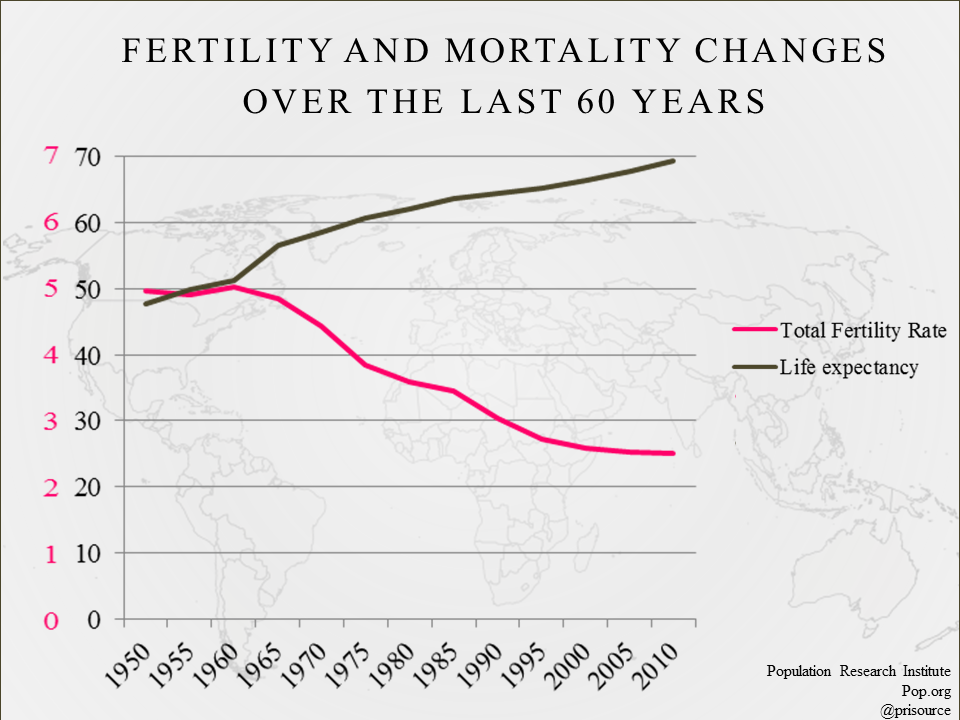 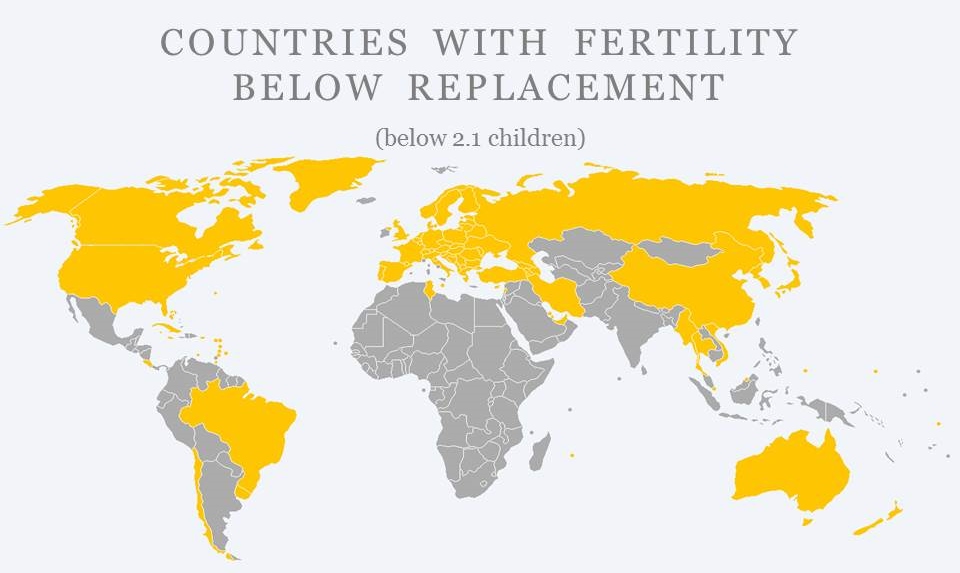 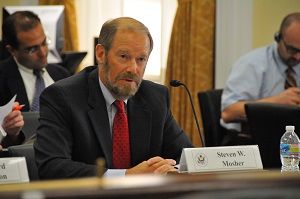 As lifespans continue to lengthen, population numbers continued to grow.

The world population quickly added another billion and the world hit 4 billion by the year 1974, even though the average world fertility rate fell by from about 5.0 to 3.9 children over the same period.

Now fertility is falling and populations are aging

Academics expected that fertility and mortality would eventually balance out, and the world population would return to stable or very slow-growing population. In much of the world, fertility has fallen far below a replacement level of 2.1 children per couple. Half or the world lives in a country that has below-replacement fertility.

Q: What is the effect of HIV/AIDS on populations, especially in Africa?

A: It’s negligible—it won’t noticeably affect Africa’s population growth rate, let alone the world growth rate. With recent advances in treatment, HIV/AIDS related deaths account for only about 2% of all deaths every year. That is, even though  HIV/AIDS is a significant public health problem, it hasn’t changed mortality rates enough to significantly change Africa’s population trajectory.

Q: What does PRI do about these misconceptions and abuses?

A: PRI documents and exposes abusive population control programs through investigative research. We send investigative teams to document abuses. PRI fights to ensure that current laws against coercion and force are followed in international aid organization.

We educate persons around the world about the nature of coercive programs and on the misconceptions behind these programs. We emphasize the world’s most undervalued resource—humans.