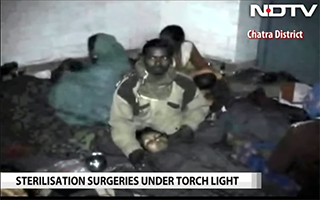 Less than two months after 13 women died in the neighboring state of Chhattisgarh, 43 women were sterilized in unsanitary and inhumane conditions in Chatra, a northern district in the Indian state of Jharkhand. Knowing the facility had no electricity, the sterilization camp coordinator rented a generator to operate theatre lights. When the generator failed, the team continued to operate by flashlight.

Savitri Devi,  the mother-in-law of a woman who was sterilized stated, “There are no arrangements at all. No medicines, we were being treated like animals. “

The 43 women sterilised remained overnight in the facility without stretchers, beds, or medicines while waiting for their compensation. Family members spent the night with the women, trying to comfort them. The relative of one of one woman reported, “Even after the operation, the patients were told to sleep on the floor. My daughter-in-law was writhing in pain through the night.” The women were each paid 1400 Rupees (about $22.70)  in the morning.

The local Deputy Commissioner stated that, “It was mere luck that averted a major disaster.”

While good luck may have prevented major casualties, it was a systematically enforced population control program that created the sterilization camp.

Local health officials in Chatra had set a target of 3,000 sterilizations for the month of January. As of January 9th, health officials claimed they had already met 25% of their target. The entire female population of Chatra is only 509,000.

Despite official federal policy, Indian states continue to enforce target-based sterilization campaigns without interference or consequences. When the conditions in the Chatra sterilization camp became well-known, the local government quickly distanced themselves from the camp and blamed the implementing NGO. Facing individual blame for the abuses, the camp coordinator stated, “We have been working with the Chatra administration since 2009. Due to our efforts, the district was awarded in 2010 for recording the highest number of sterilizations. . . We perform 4,000-5,000 procedures in these districts annually.”

The camp-coordinator was correct; the implementing NGO has a long and well-known history of sterilizations in the region; the existence of their sterilization camp could not have taken anyone by surprise.

DKT International’s homepage for Janani boasts that the organization has sterilized over 270,000 women and 12,000 men in Jharkhand and two other Indian states.

Perhaps Janani normally operates without coercion, and this month’s case in Chatra was indeed a one-time error, but coercion and lack of consent are the norm in sterilizations in Jharkhand. According to the Demographic and Health Surveys (DHS), more than four in five women who are sterilized in Jharkhand weren’t given follow-up information about what to do in case of side effects or complications. One in three women in Jharkhand who had been sterilized reported that they did not know at the time that they were receiving a permanent sterilization.

These numbers are sadly representative of India’s sterilization campaigns as a whole. On average, one out of two Indian women are sterilized by the age of 35, and Jharkhand’s rate of informing women that they are undergoing a permanent sterilization procedure is actually higher than the national average.

With decades of abuse, millions of victims, and millions of dollars to bankroll the sterilization camps, it is time we stop pointing fingers at individual Indian doctors. It is time to call the population control program in India for what it is: an organized program of abuse. Until we concede that the victims are not exceptions, but are the product of an internationally endorsed, structural norm, the camps will continue to produce victimized women.

No U.S. funds should go to any country or organization that helps to organize, administer, or advocate such abusive programs.

A husband comforts his wife after sterilization as they spend the night on the floor. 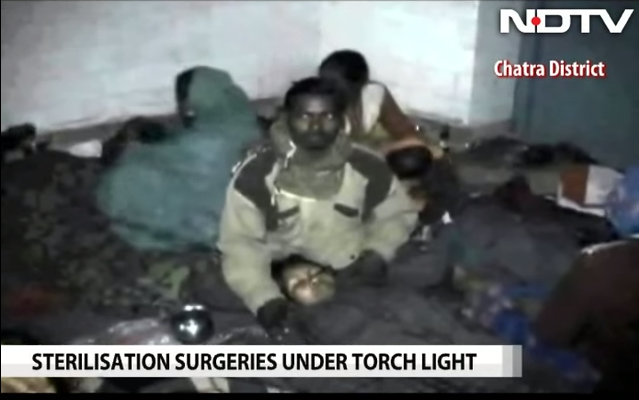 The camp lacked stretchers to transport women who were carried by other women. 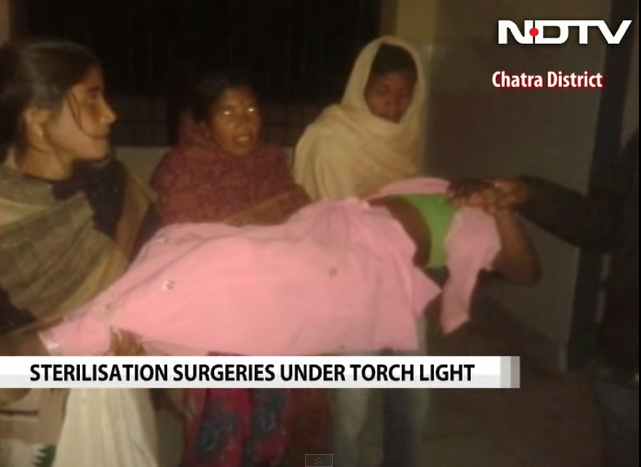 When the generator failed, the doctor continued to work by flashlight.

The sterilization camps was carried out by Janani, an affiliate of the US-based DKT International. 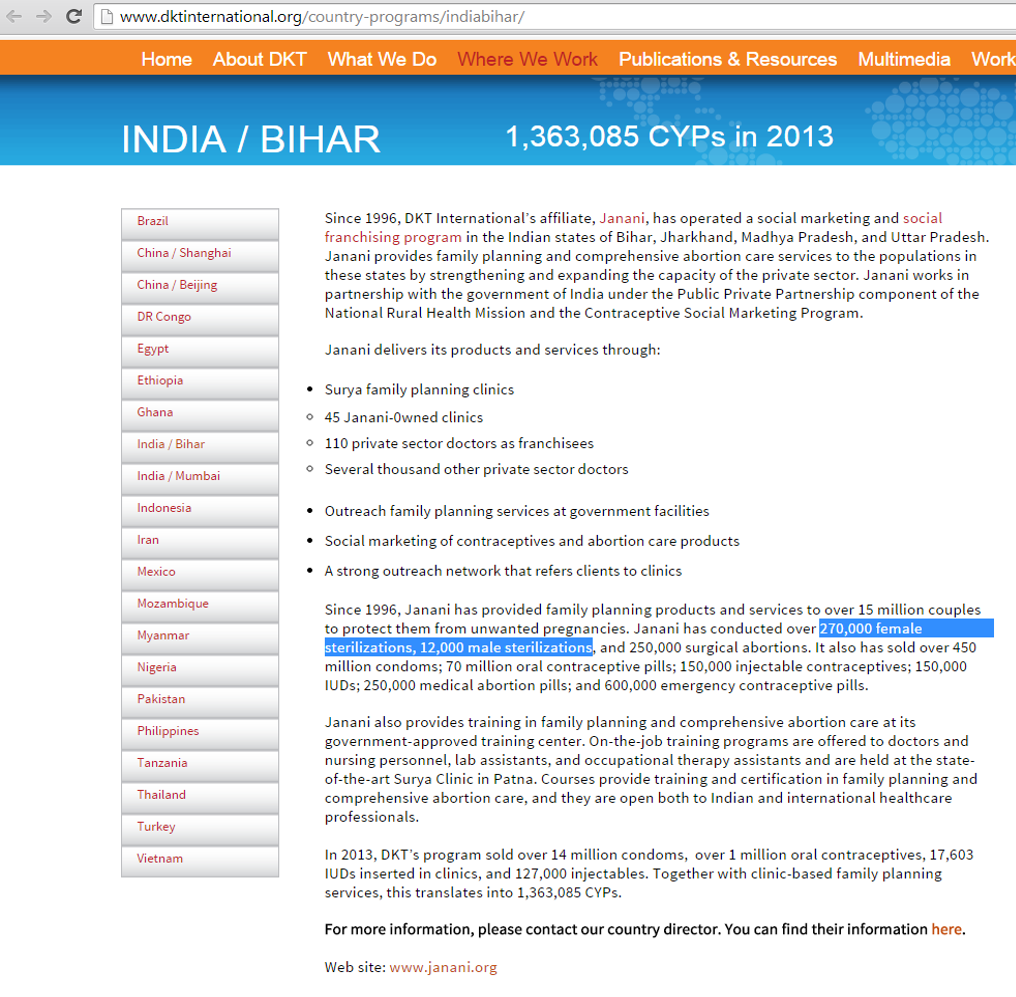 DKT International receives funding from several governments including the United States, Australia, the Netherlands, and India. 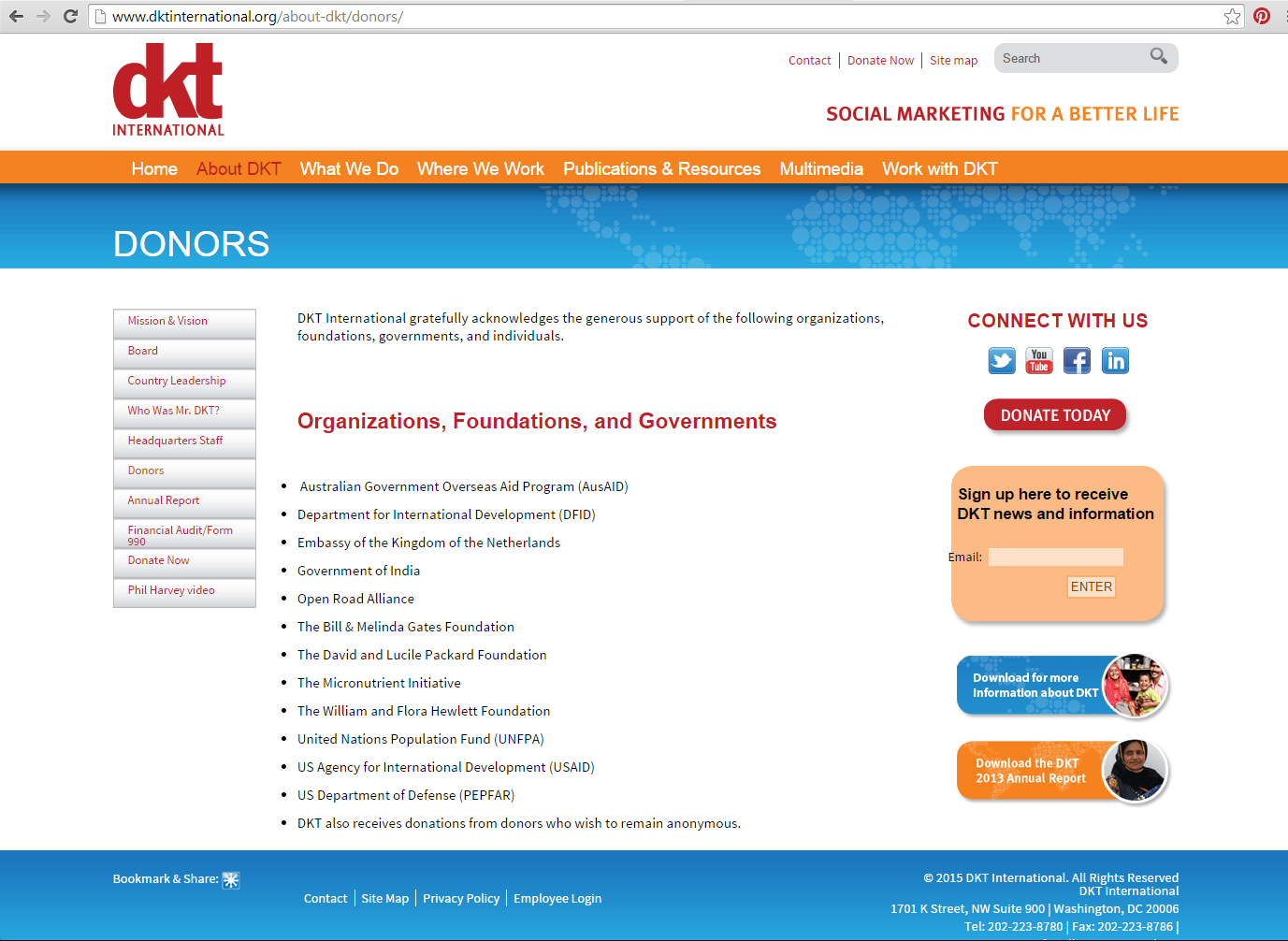