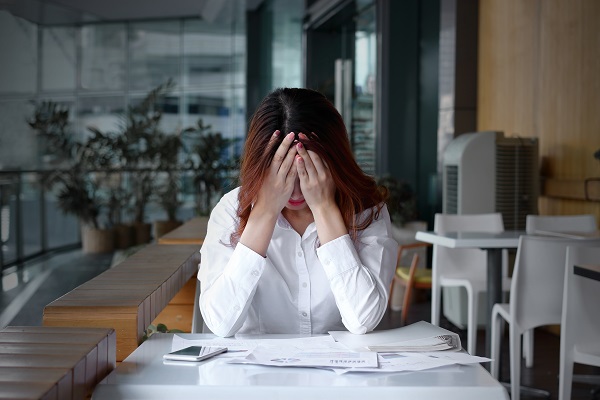 Some Female Employees Are Being Told to Take Turns Having Kids

For working women in Western societies, sometimes getting ahead means you may have to put off having the baby that you wanted to have for a few years.

But in countries like Japan, where population shrinkage has created labor shortages, it is an unwritten rule in jobs which predominantly employ young women that they ought to take turns when conceiving, creating what some have called a de facto “pregnancy rota.”

A recent story from Agence France-Presse (AFP) highlights the dilemma that many Japanese women in female-dominated industries face.

One woman who goes by the pseudonym “Mayu” interviewed for the story told AFP that after returning to work following her maternity leave, she had asked if her employer would send her to a professional development program.

“[H]er reaction was: ‘You took maternity leave and worked shorter hours. How many more favours do you want’?,” Mayu told AFP, “I have been told the same thing by three bosses over the past five years.”

Another woman under the pseudonym “Sayako” interviewed for the same story told AFP that she had left her old employer after being told that older newlywed employees had priority in being allowed to have a child on the job.

In speculating what she would have told her old employer had she had a child without her boss’s permission, “I think I’d have said I’m sorry,” Sayako told AFP.

But Sayako and Mayu are not alone. In Japan’s childcare industry, it is not uncommon for employers to set expectations for when their employees may take their “turn” at having a child.

As fewer parents are able to stay at home to raise their children, the demand for childcare in Japan has skyrocketed. According to the Japan Times, more than 95,000 children in 2017 were on waiting lists or were unable to be enrolled into day care centers. Child care centers in Japan are government-funded and struggle to attract and retain employees as the jobs have low pay, long hours and weekends, and little vacation time.

In effort to retain a sufficient number of workers, employers often set unofficial schedules for when employees can have a child, with priority typically given to older, more senior staff.

Toko Shirawaka, an expert who advises the government on labor issues, told The Times in an interview that it is against the law in Japan for employers to coax women to abide by a “pregnancy rota.” Nonetheless, he claims, pregnancy scheduling is widely practiced in the child care industry and in other jobs that primarily employ female workers.

Many women and their employers see taking turns at conceiving as a fair compromise for pulling their fair share of work. Women who take maternity leave out of turn sometimes feel guilty as their co-workers are often left with a higher workload due to reduced staff. As a result, many women feel compelled to postpone childbearing for the sake of their peers or job security. Others sometimes feel pressured to rush into pregnancy when it is their “turn.”

Childlessness is not particularly uncommon in Japan either. Indeed, 27% of women born in 1970 remain childless. The fact that many women choose to delay childbearing, or forgo it altogether, further legitimizes the use of pregnancy scheduling. Employers believe that having only one or even no child should be “ok” with their employees.

“Why don’t you take a break, you already have one [child],” Sayako told AFP, repeating the words her old employer had conveyed to her.

The issue of de facto “pregnancy rotas” has become a subject of national dialogue in Japan after a 28-year-old man penned an open letter in a national daily newspaper this February. His wife, a child care worker had been rebuked by her employer for having a child outside of the company birthing schedule. His letter published in the Mainichi Shimbun read in part:

“The director at the child care center where she works had determined the order in which workers could get married or pregnant…My wife and I went together to apologize. “We’re sorry we got pregnant,” we said. The director grudgingly accepted our apology, but since the next day, has been chiding my wife with harsh words, such as, “How could you so selfishly break the rules?”

Employer-mandated pregnancy scheduling is not confined to the child care industry either. A 26-year-old worker at a cosmetics-related company told the Mainichi Shimbun that her employer had emailed her and her female coworkers a timetable for when employees would be allowed to have children. “Selfish behavior will be subject to punishment,” the email allegedly warned.

Reproductive coercion, including attempts to regulate fertility through pregnancy scheduling, are contrary to human rights and international norms that recognize the rights of couples to family formation free from coercion.

Pregnancy rota policies seem particularly out of place given the country’s struggle to reverse its population decline. According to the Ministry of Internal Affairs and Communications’ Statistic Bureau, Japan’s population has declined every year since 2010.  Between June 2015 and June 2016 alone, the total population in Japan fell by 140,000 people.[1]

Japan’s total fertility rate (TFR) is an anemic 1.44 children per woman of reproductive age, according to the Japanese Ministry of Health, Labor and Welfare,[2] far below the 2.07, Japan’s replacement fertility rate for the 2015-2020 period, according to estimates from the United Nations Department of Economic and Social Affairs. Japan’s TFR has been below 2.07 since 1974.[3] 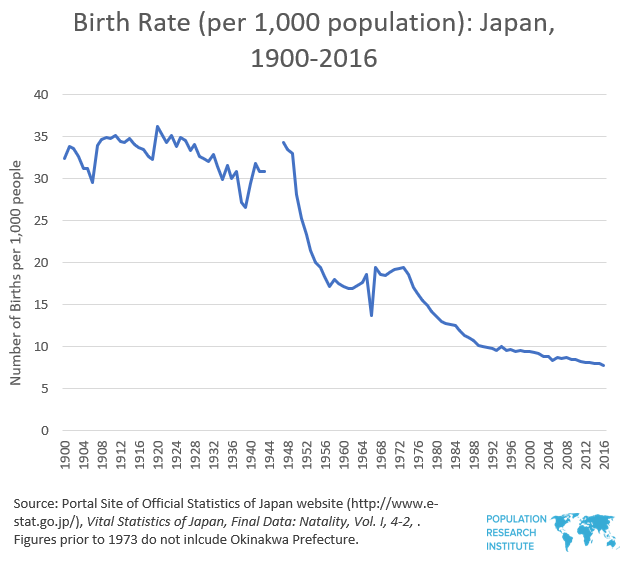 According to the Japanese Government, there were only 976,978 births in 2016, the lowest number of births recorded since the 1880s. The birth rate that year was only 7.8 births per 1,000 persons, the lowest birth rate on record.

Japan’s population decline has slowed economic growth, contributed to deflation and has caused wages to stagnate. The shortage of workers has forced a higher percentage of women of reproductive age into the workforce. The percentage of women 25-34 years of age who are in the labor force increased by 23% between 2000 and 2017.[4] 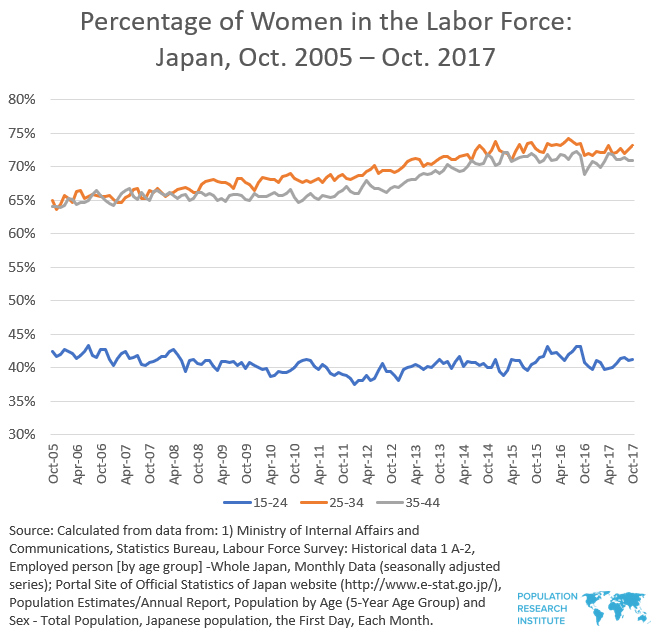 Married women in Japan have fewer children than they would like. According to data from the National Institute of Population and Social Security Research’s Japanese National Fertility Survey, while women in 2010 desired to have an average of 2.08 children, the actual achieved fertility rate was only 1.77.[5]

In Japan as elsewhere, many employers treat maternity leave more like a favor or a benefit to be earned rather than an obligation to take care of one’s family. Many women postpone childbearing in order to ingratiate themselves with their employers or to not fall behind their peers. They sacrifice their family goals for career advancement.

Japan’s demanding work culture does not accommodate women who want to have children. As a result, many women who do give birth simply leave the workforce afterwards.

Reversing Japan’s downward spiraling birthrate, will require a cultural transformation in the workplace. It will require a reversal of stagnating wages to free up couples both financially and in terms of time to focus on family. It will require more accommodation for women’s needs. It will also require the government to encourage marriage and childbearing through the tax code, by sheltering young couples who are willing to have children from Japan’s onerous tax rates.

Whether Japan gets it right will determine the country’s future. Japan’s economic woes stem largely from its low birthrate. Until the birth rate rises to replacement or higher, its problems will only get worse.