Population controllers are constantly talking about "reproductive health," and their burning desire to reduce maternal mortality worldwide.  This is the excuse that they use for pushing contraception, legalized abortion, and sterilization on developing countries all over the world.  However, this is simply a ploy to make their real purpose more palatable: controlling the world’s "booming" population.

Babies and children are not the only ones who suffer from this misguided mission.  Mothers and families, whose lives would have been bettered by actual relief work and health care, suffer as well.

In other words: not only does the abortion/contraception-related work of USAID or Ipas fail in its mission to provide legitimate reproductive health, it actually causes more harm to women.  Obsessed with reducing the fertility of as many of the poor as possible, the controllers have long advocated turning a blind eye to their other health needs.  Here are a few examples:

Each of these practices injures or even kills women. This is what we mean by reproductive health" mortality: The deaths that result from the abuse and misuse of family planning programs.

"I’d rather do less good service to more people, than perfect service to fewer people," Frances Hand Ferguson, one-time vice-president of the International Planned Parenthood Federation, said. This attitude continues to hold sway at PPFA, to judge from Pamela Maraldo’s brief tenure as president in the nineties, which ended when she tried to broaden the range of health services offered by Planned Parenthood clinics. The nation’s premier abortion, sterilization, and contraception organization was having none of that.

The situation is similar at USAID, which even officially rebuked Planned Parenthood for providing "unnecessary" health care. "All too often," they complained, "family planning programs impose numerous medical barriers to service which we are convinced hinder program effectiveness and impact, especially for hormonal contraceptives. Common examples of what we mean by medical barriers include unnecessary laboratory tests; excessive physical exams. . . excessive counseling and history-taking in such a way as to include a lot of irrelevant information rather than the important things, the net effect being to increase waiting time and see few[er] clients."

Such practices lend credence to the assertion that, when it comes to women’s health, USAID cares more about how many women are sterilized or contracepted than about how many are made healthier, even when health is defined strictly in "reproductive" terms. 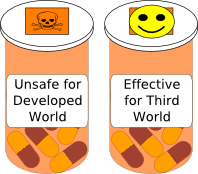 Drugs banned by the FDA are sold at discount as third world birth control.

Most so-called "modern" contraceptives have been tested in field trials on healthy women of the developed world. Their indiscriminate use on women in the developing world who are malnourished, anemic, or suffer from other health problems can have a devastating effect on women there. Many women in Bangladesh who were given Norplant, for instance, suffered serious side effects. According to Farida Ahktar, an activist concerned with the plight of poor women, Bangladeshi women who had received Norplant suffered side-effects much more serious than those admitted by Norplant’s proponents: continuous bleeding far heavier than a normal menses, weakness in the limbs, severe pain and, significantly, blurred or double vision.

Dr. Stephen Karanja, the former Secretary of the Kenyan Medical Association and an obstetrician-gynecologist by training, often sees patients who have been harmed by these powerful, steroid-based contraceptives. "High blood pressure was never really a major African disease," he explains, "but now we have blood clots, liver problems, and problems with bleeding. In Africa where tropical disease already cause women to be weak with poor blood levels, when they start bleeding irregularly or continuously because of these contraceptives, you literally reduce them to cripples. The woman is the center of the African family. If you want to destroy the African family, attack the mother. And I ask myself, why does the US attack the center of the African family? These women walk around with difficulty because of anemia, with swollen legs, with livers damaged. There are women who are going into heart failure because of bleeding, because of [contraceptive] drugs."

Dr. Karanja is particularly critical of the indiscriminate "social marketing" of Depo-Provera, noting that it "cause[s] terrible side effects to the poor people in Kenya, who do not even have competent medicalcheck-ups before injection."

The African women who are so cavalierly given powerful, steroid-based contraceptives are often not informed of the serious side effects that can result. On its website, the manufacturer of Depo-Provera prominently lists a number of serious complications that can be caused by the drug, including "delay in spontaneous abortion," "fetal abnormalities," "thrombotic disorder" (blood clots), "ocular disorders" ("a sudden partial or complete loss of vision"), and "lactation" (the passing of the drug through breast milk to nursing infants). The Depo-Provera packaging designed by the population controllers for unsuspecting Kenyan women, however, contains no such off-putting warnings.

The indiscriminate distribution of contraceptives to women in the developing world, who are often malnourished and in poor health, is dangerous to their health.

And, as Dr. Karanja suggests, the lack of follow-up care can in some cases be fatal. Take the danger of ectopic pregnancy following sterilization, for instance. Cutting the fallopian tubes of a woman does not always prevent conception, but it does prevent the developing embryo from entering the uterus. Instead, the embryo implants at the site of the blockage, a dangerous condition commonly known as a tubal pregnancy. The problem is that the thin-walled tube cannot support a pregnancy beyond a couple months of gestation, and when it ruptures the resulting hemorrhaging is often deadly. Women who have been sterilized, assembly-line fashion, in population control campaigns are at particular risk of dying because they are given no warning about the possibility that they might become pregnant again in this way.

In some cases, the controllers do not merely turn a blind eye to problems, but have deliberately engaged in seemingly unethical, if not criminal, acts.

After the FDA in 1970 declared high-estrogen birth-control pills to be unsafe, the pharmaceutical companies were left with warehouses full of the now-unmarketable contraceptive. Syntex executives offered to sell USAID their entire stock at a heavily discounted price, an offer that USAID’s Office of Population, less concerned about safety than in checking fertility cheaply, was only too happy to accept.

Dr. Malcolm Potts, a leading contraceptive researcher then serving as the IPPF’s medical director, was among those who defended this decision to distribute the dangerous pills. The FDA’s regulation of oral contraception in the U.S. was, in his words, "a lot of pompous nonsense," and maintained that the high-estrogen pills carried a minimal health risk. As far as the painfully swollen breasts that the pill could cause, women should not complain: "It makes your breasts more beautiful and that is good for everyone-including the tailors who have to make bigger brassieres."

Are similar abuses occurring today? One could argue that the continued distribution of Norplant by USAID-years after the U.S. manufacturer has taken the device off the market for safety reasons-is comparable. Encouraging the self-injection of Depo-Provera is another example of a questionable practice that violates FDA regulations and may lead to serious side effects or even death. The population controllers’ dream of the over-the-counter sale of Depo-Provera and birth control pills, and their widespread distribution by "paramedical" staff with only minimal training-both practices which also contravene FDA regulations-has become a reality.

Even today, the controllers do not seem so terribly concerned about the safety of the devices, drugs and practices that they promote around the world to curb fertility. After all, they argue, the risks of dying in childbirth in the developing world are so great that the use of almost any contraceptive device or sterilization technique is justified to spare a woman this fate. The former director of USAID’s Bureau of Global Health used a similar line of argument to deflect my concerns about post-sterilization ectopic pregnancies. Whatever the cost of Peru’s coercive sterilization of 300,000 women a few years ago, she implied, it had benefited women by reducing the number of pregnancies and hence maternal mortality. If a few women died from ectopic pregnancies, that was a small price to pay.

In the words of Rep. Chris Smith (R-NJ), "we have turned pregnancy into a sexually transmitted disease." Only when this "disease" is completely cured will the population controllers be content to cease their activities. And it doesn’t matter how many women die from family planning abuses in the meantime.

Steven Mosher is the President of the Population Research Institute.