Philippines: No to Population Control, Yes to Authentic Development—Part I

Such policies cause the opposite of what they are intended to achieve: more poverty, more disease and more wasteful government spending.

Philippines president Rodrigo Duterte has vowed to “champion contraception…to reduce poverty by 25 percent in six years.” “I only want three children for every family,” Duterte stated publicly, “I’m a Christian, but I’m a realist so we have to do something with our overpopulation.” Having promoted, as former mayor of Davao, sexual “education,” free contraception and free access to tubal ligation, Duterte now says that “a more aggressive approach” is necessary because “our resources cannot meet the demand.”

Hear Dr. Christopher Manion read this article: “Philippines: No to Population Control, Yes to Authentic Development—Part I of II.”

In terms of population, from 26 million people in 1960 to current 103 million, the Philippines is the 12th largest country but only 38th in terms of density. Many densely populated countries are well off (UK, Germany, Japan). Even more, they have high GDP growth: the Philippines annual GDP growth rate of the last 5 years is about 6%, way more than the 1.6% population growth. In the last 55 years, only 5 years showed lower GDP than population growth, being the average about 4%.

Except for economies highly based on extractive industries (oil, minerals), it is difficult to find a single large country with at least a decade of high GDP-growth rate and that isn’t densely populated.

This real demographic dividend (totally different than eating up the accumulated capital) resulted in a tremendous rise in GDP/capita, which has grown 70% (from $1,500 to $2,600) in a decade (or more than doubled since 1960).

Just by following the trend, Duterte could enjoy the political dividend of poverty reduction and growth, without doing anything new, like population control. 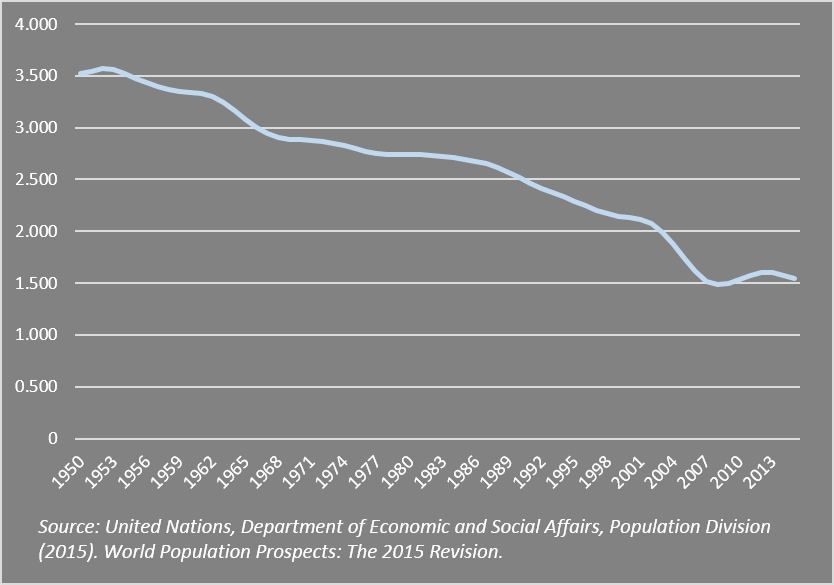 The population growth rate is falling, following the dramatic decline of the total fertility rate (TFR, live births per women of reproductive age). 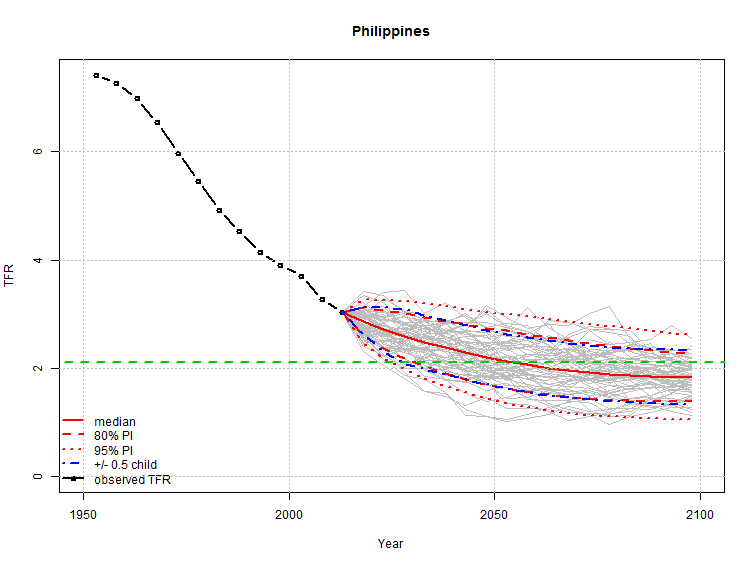 The current rate is below 2.9 (while the replacement level should be 3), and has been on the decline since 2013.

Wasn’t the replacement level supposed to be 2.1? This error is repeated on purpose by antinatalist demographers. TFR compares figures for the average number of children that would be born per woman if all women lived to the end of their childbearing years and bore children according to a given fertility rate at each age. Due to different mortality rates (including accidents, epidemics and natural disasters) the TFR goes from 2.05 to 3.43 in developing countries. Also, statistics could be influenced by a shorter childbearing period, that is, starting later and ending sooner (e.g. from 15 to 44 years old, instead of 49).

Even if Duterte does absolutely nothing to change current family planning trends, fertility will continue declining below 3 children per woman.

Due to the trend of better nutrition and healthcare, higher life expectancy the population of the Philippines is expected to continue growing over the next several decades until the population is projected to peak at about 150 million. 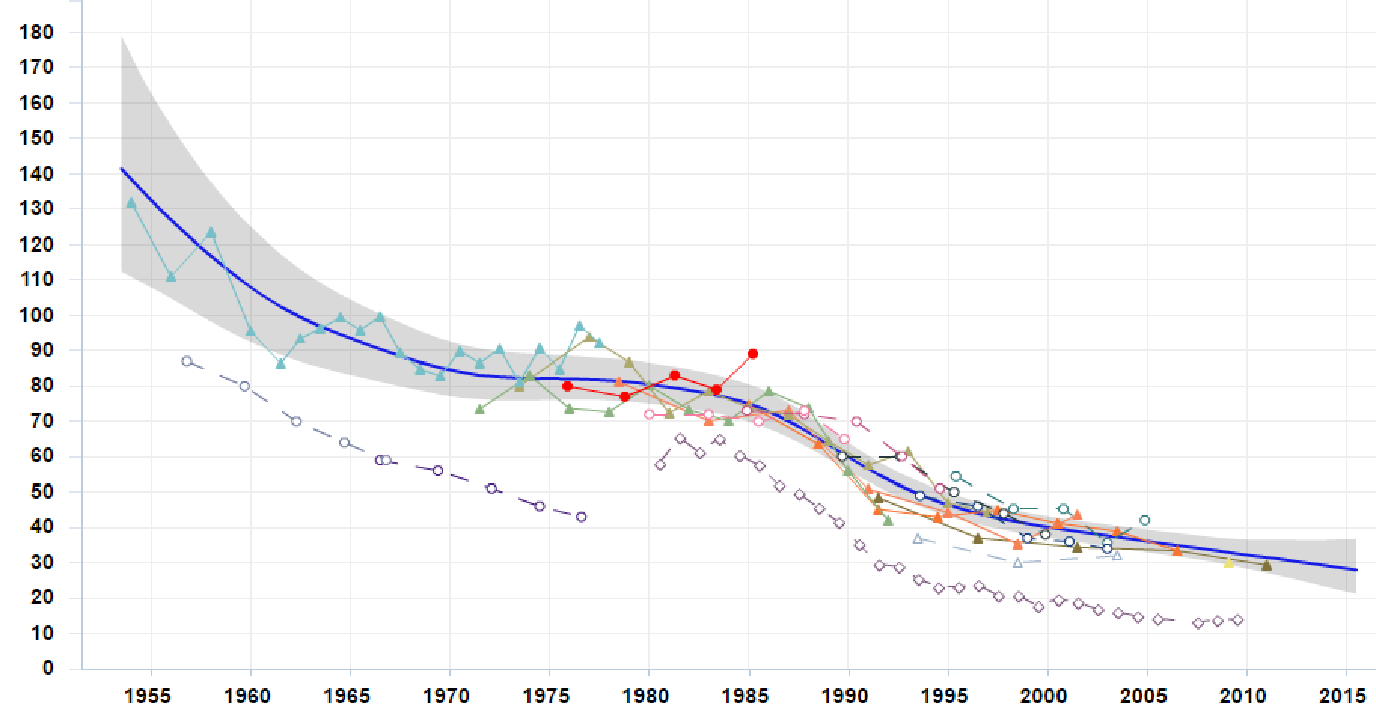 Nevertheless, this is compensated by the fertility decline which “seems to be much sharper based on cohort fertility measures compared to usual measures like TFR.”i The number of children under the age of 5 are projected to decrease from 12% of the population in 2010 to 7% in 2045.

Although the number of births annually in the Philippines has varied over the past few decades, the number of births has consistently declined since it last peaked in 2012 while deaths continue to increase at a steady rate. ii This is reflected by a falling birth/death ratio (fewer people are being born than dying off). This ratio gets slightly lower if we consider the effect of a negative net migration in the Philippines.

If there is no trend-change, in less than 70 years most of the 2012 “peak cohort” will have disappeared (diseases, accidents, disasters, aging, migration). We can expect that this trend will continue as the number of births have steadily declined since 2012. 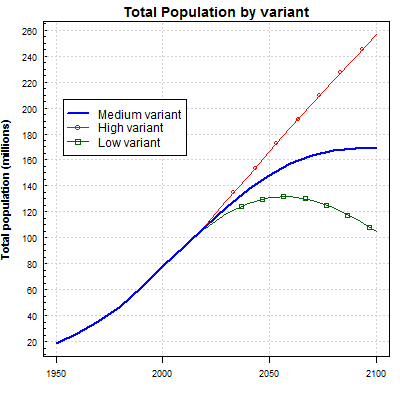 As early as 2060, the Philippines’ total population could start declining. The Philippines is headed into complete extinction in a couple of centuries, not by atomic bombs or biochemical agents but by a more lethal weapon of mass destruction: antinatalism. The millennials could be the last generation before the obliteration of the nation.

This article is the first installment of a two-part series. To read Part II, click here.

Professor Federico A. Nazar is a researcher and writer specialized in bioethics and global health, who received the “Natural Family Award” by the World Congress of Families . He was keynote speaker at several conferences, taught ethics for over a decade at a Pontifical Catholic University and developed the first natural-law and science-backed certification programs (Human rights, Pro-life, Pro-family, Morally Responsible Organization, Socially Responsible Organization) for individuals, organizations, corporations and governments. Happily married, with his wife, they are proud parents of 7 children (possibly more). Can be contacted at [email protected]

i Jones LE, Tertilt M. An economic history of fertility in the United States: 1826–1960. NBER Working Paper Series, No. 12796. Cambridge, Massachusetts: National Bureau of Economic Research, 2006.For instance, “the total fertility rates during the Baby Boom dramatically overestimated U.S. fertility, because they reflected the fact that some women were having babies at ages younger than had been the norm, while others were perhaps “catching up” on births that were postponed due to World War II. For example, the TFR in 1960 was 3.65, but women who entered their childbearing years around that time actually gave birth to about 2.45 children in their lifetimes, according to 1985 completed fertility.”

A similar mechanism is occurring in developing countries: as women extend education, enter the labor force and work more years they tend to postpone and reduce the number of children. This trend is not reflected by TFR, which will end up being lower than expected. Women’s ‘empowerment’ through education and work opportunities is more powerful than any other population control policy, even forced contraception. That is why they are the top Sustainable Development Goals of the antinatalist UN.

ii The Philippine Statistics Authority projects a decline in the under-5 population by 2020: https://psa.gov.ph/sites/default/files/attachments/hsd/pressrelease/Table1_8.pdf .