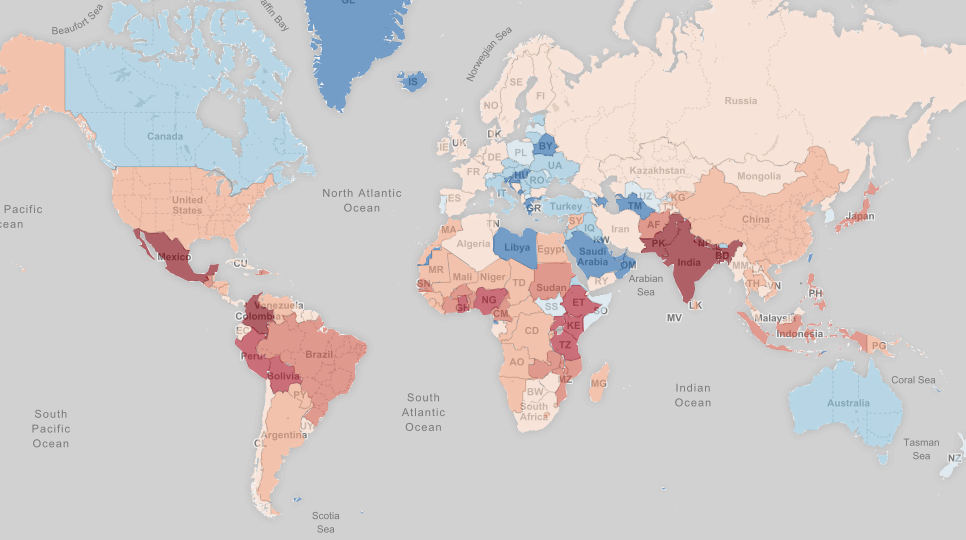 The International Planned Parenthood Federation (IPPF) reports that its affiliates ended the lives of nearly one million unborn children in 2015. In all 964,325, unborn children were terminated by chemical and surgical abortion by IPPF just last year alone.

A million of anything is a staggering number. But the loss of nearly a million children by surgical or chemical abortion is a tragedy beyond reckoning.

If you were to read off the names of IPPF’s tiny victims—without sleeping, breaking or pausing—it would take you almost two years. In fact, you would never finish. By the time you finished reading the list of all the lives lost in 2015, IPPF’s abortion facilities will have added another two million lives to be accounted for.

Over the past 60 years, the International Planned Parenthood Federation (IPPF) and its affiliates have terminated the lives of millions more unborn children. IPPF claims to have provided 16.8 million abortion-related services over the past five years, some 4.3 million [1] in 2015 alone. 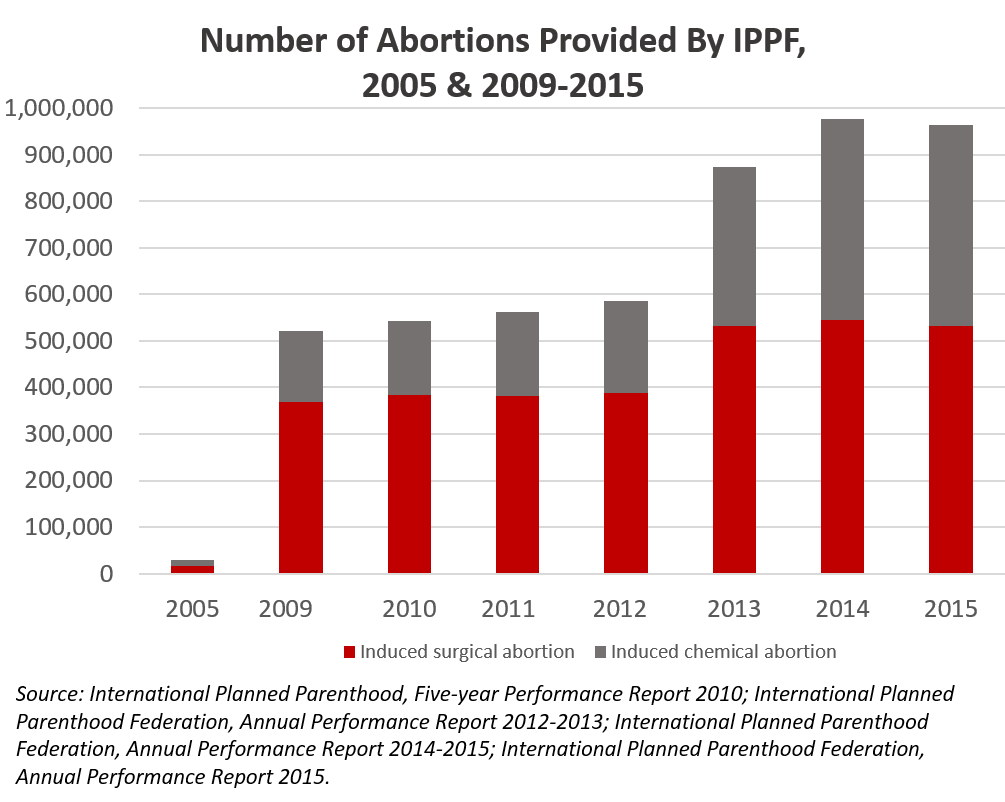 IPPF invests tens of millions of dollars (USD) in its affiliates and other like-minded organizations every year to promote abortion and contraception worldwide.

IPPF strives to be “a leading advocate of sexual and reproductive health and rights” by which they mean to promote abortion “rights”, graphic sex education “rights”, and contraception around the globe.

In pursuit of this agenda, IPPF has distributed approximately 1.7 billion condoms worldwide over the past ten years. That’s roughly equivalent to one condom for every man on the planet between the ages of 15 and 44.

The number of young people being (mis)educated by Planned Parenthood in sexual matters has also exploded in recent years. By 2015, 99 million young people were said to have completed a sex education program taught by an IPPF affiliate. 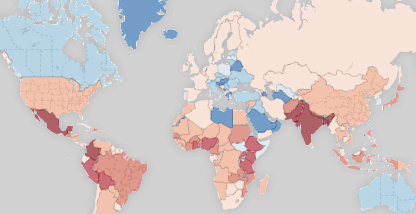 IPPF also lobbies governments to legalize abortion and, where it is already legal, to increase access. In this effort, IPPF often works through Member Associations (MAs). Where they exist, Member Associations are the primary conduit through which IPPF advocates for changes in laws, policies, and directives from Ministries of Health. IPPF will sometimes partner with other organizations in addition to their MA, or even operate directly, or with other partners, in countries where it has not yet organized an MA.

How effective has IPPF been in changing laws and policies to promote abortion and contraception? Consider the following. 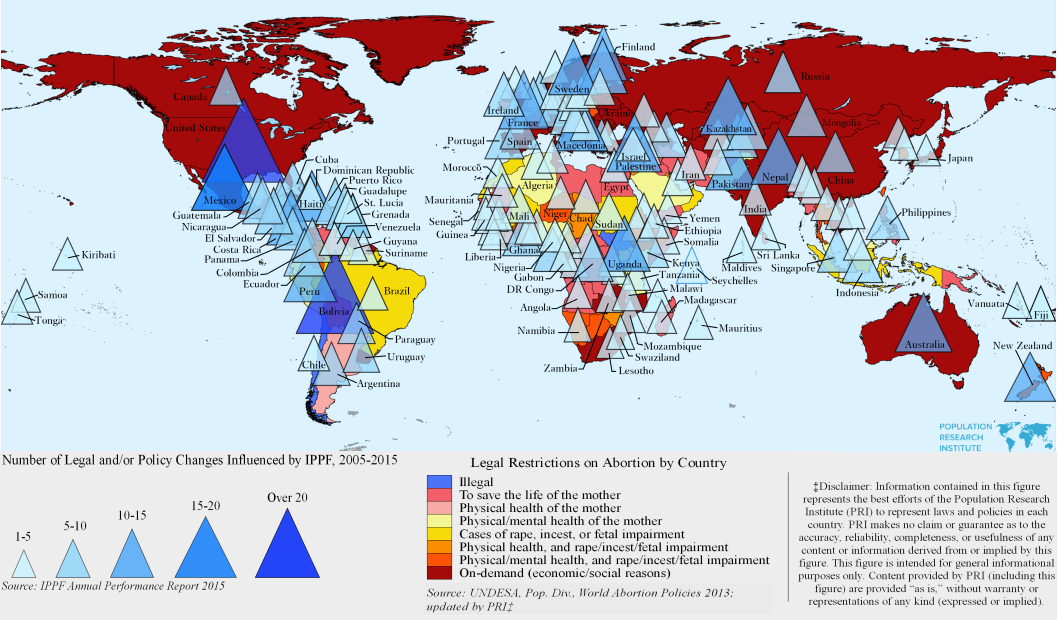 In 2014, IPPF’s affiliate in Ghana, Planned Parenthood of Ghana (PPAG), launched a full-fledged media campaign to lure young people into their clinics. According to IPPF, PPAG ran frequent ads over FM radio and launched a mobile app to send out information about their services along with “diagrams relating to sexual and reproductive health.” The result of these efforts was an increase in the “number of clients provided with safe abortion services…by 25 percent.”

Between 2012 and 2014, IPPF’s European Network, a regional office of IPPF, successfully petitioned the Europeans Social Rights Committee (ESRC) of the Council of Europe to condemn Italy for allowing too many doctors to claim conscientious objection rights when refusing to perform abortions. Because the vast majority of doctors in Italy will not perform abortions for reasons of faith or conscience, ESRC accused the Italian government of not providing sufficient access to abortion. It remains unclear if doctors in Italy will lose their right to conscientious objection or even be pressured into performing abortions in the future.

In Nepal, nurses were originally not permitted to perform abortions. But in 2014, IPPF affiliate in Nepal, the Family Planning Association of Nepal (FPAN), successfully petitioned the government to gain approval for its nurses to perform abortions in some of its clinics. Can anyone doubt that the number of abortions performed in Nepal will now increase?

In addition to effecting legal changes, IPPF also seeks to change public opinion about abortion and contraception in the public square. It claims to want to “destigmatize” abortion, by which the organization means that it wants to accustom people to the idea that it is alright to dismember unborn children. IPPF regularly promotes abortion as a “safe” even as dismemberment abortion is never “safe” for the unborn child.

The money comes from a handful of wealthy Western nations including Sweden, Japan, the U.K., and Germany. U.S. Government funding of IPPF and foreign IPPF MAs is comparatively small—at least relative to the hundreds of millions of taxpayer dollars given annually to the Planned Parenthood Federation of America, IPPF’s MA in the United States. Even so, federal funding for IPPF is not insignificant.

According to a report from the U.S. Government Accountability Office (GAO) released last year, IPPF Member Associations collectively received approximately $23 million from the United States Agency for International Development (USAID) and an additional $3 million from the Department of Health and Human Services (HHS) between 2010-2012. The GAO did not report any direct funding for IPPF or the IPPF Western Hemisphere Regional Office but rather funds were made available directly to the IPPF Member Associations themselves.

One must wonder why U.S. taxpayers have paid for $26 million to be given to an organization that performs nearly one million abortions a year and is actively involved in promoting the legalization of abortion in countries that protect the right to life for the unborn.

[1] 4.3 million abortion-related services includes the nearly 1 million (964,325) chemical and surgical abortions carried out in 2015 as well as consultations for abortion, abortion procedures for incomplete abortions, and other services.

[2] Includes funding for grants, commodities, and technical assistance provided to Member Associations and other organizations both through IPPF and through IPPF’s role acting as Secretariat for the “Safe Abortion Action Fund” (SAAF). IPPF manages SAAF on behalf of donors and recommends which applicants should receive funding based on applicant qualifications. SAAF was specifically established by the governments of the U.K., Denmark, Sweden, Norway, and Switzerland to increase access to abortion.