Mosher to Speak at the Heritage Foundation

WASHINGTON, D.C. — Critically acclaimed author and internationally-recognized authority on China, Steven W. Mosher, will be discussing his new book, Bully of Asia, at the Heritage Foundation on January 17,  at 12:00 pm EST.

In Bully of Asia, Mosher explains why an increasingly assertive and militaristic China poses the single greatest threat to the United States and the peaceful, prosperous, and free world America guarantees.

“China’s resurgent aspirations for hegemony are rooted in hyper-nationalism,” Mosher says, “the Chinese Party-State ceaselessly fans the flames of xenophobia, pushing the narrative that China has suffered humiliations at the hands of the West, particularly the United States, long enough. It is China’s manifest destiny, the regime tells its people, to dominate the world and to usher in the fabled ‘World of Great Harmony.’” 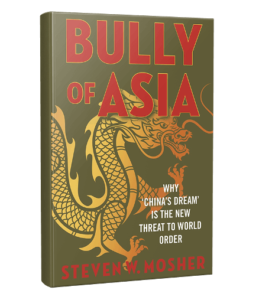 Mosher knows China as few Westerners do. In the late 1970s, he was the first American social scientist permitted to study in Communist China. After exposing forced abortion and forced sterilization under China’s notorious one-child policy, he was targeted for retaliation by the Chinese Government.

Bully of Asia: Why China’s Dream is the New Threat to World Order

Steven W. Mosher is the president of the Population Research Institute (PRI) and an internationally recognized authority on China. He is a former Commissioner of the Commission on Broadcasting to the People’s Republic of China and previously served as the Bradley Resident Fellow at the Heritage Foundation. He regularly testifies before Congress on China and related issues. His books include Journey to Forbidden China; A Mother’s Ordeal: One Woman’s Fight against China’s One-Child Policy; Broken Earth: The Rural Chinese; China Misperceived: American Illusions and Chinese Reality; and China Attacks (with Chuck DeVore).