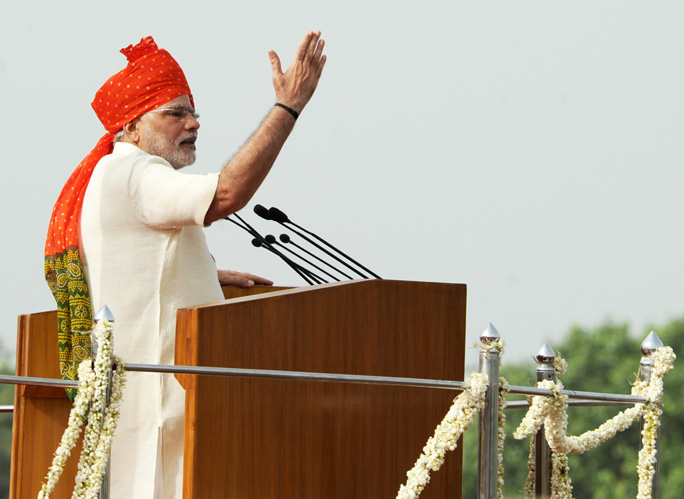 The leader of the world’s largest democracy has called for population control policies to contain what he claims is a “reckless population explosion” in India.

In a high-profile and widely publicized address to the nation on India’s Independence Day on August 15, India’s Prime Minister Narendra Modi called on the central and state governments to implement policies to control the country’s population growth rate.

“Population explosion will cause many problems for our future generations. We have to be concerned about population explosion. The centre as well as state governments should launch schemes to tackle it,” Modi said in his Independence Day address before the nation’s iconic Red Fort in Delhi according to NDTV.

The prime minister also called on Indian couples to have smaller families and praised Indian citizens who have already embraced smaller family norms, saying that having fewer children is “an act of patriotism.”

“I want you to do proper family planning and you will naturally see that a smaller family can be happier and more content. Your family will be away from diseases, will have more resources,” Modi said in his 92-minute speech according to News18.

Modi’s Independence Day address marks the first time in several decades that a sitting prime minister has broached the possibility of introducing population control policies in India. It also marks an apparent break with the central government’s position on population over the past decade which had previously emphasized the benefits of reaping an economic boon and “demographic dividend” from a growing labor force and gradually declining fertility.

Modi’s address has triggered speculations that the Indian government may soon be set to introduce a nationwide population control policy.

Contrary to the prime minister’s dubious claim of an impending “population explosion,” however, the population growth rate in India has slowed considerably over the past decades.

Population growth declined in India by 21.5% between 1991 and 2001 and declined by 17.7% between 2001 and 2011. According to the United Nations Population Division, India’s population is projected to peak in 2059 and begin declining thereafter.

Fertility in India has also fallen precipitously in recent decades. In 1985, India’s total fertility rate (TFR) stood at 4.3 children per woman of reproductive age, according to the Indian government’s Sample Registration System. By 2017, however, national TFR had declined down to 2.2.

The fertility rate has dipped so far, in fact, that India may already be at, or below, the replacement rate.

Typically replacement fertility— the minimum fertility level needed for each generation to replace itself—is pegged at about 2.1 children per woman. But the replacement rate can be higher in countries where there is high infant or child mortality or in countries where the sex ratio is heavily skewed due to the practice of sex-selective abortion and postnatal daughter neglect.

Because of these deep imbalances in the population sex ratio, the Indian Ministry of Finance, in its recently released Economic Survey 2018-2019, believes that replacement rate fertility in India currently lies somewhere between 2.15-2.2. The actual total fertility rate in 2017 was 2.2. Given the downward trend in fertility over the past several decades, it is likely even lower today–and below the replacement rate.

Many states in India are already below the replacement level. In 2017, 15 out 22 major states and union territories in India had below replacement fertility according to Sample Registration System data.

Even in India’s highest fertility states, fertility has declined markedly. In Bihar, TFR stood at 4.17 in 2006 but had slipped down to 3.4 by 2017. In Uttar Pradesh, TFR fell from 4.16 in 2006 down to 3.0 in 2017. Not one major state or union territory in the country has seen a fertility rate increase over the past decade.

State-sponsored population control has a long and contentious history in India. In 1951, India became the first developing country to introduce a national family planning program with the aim of controlling the country’s population growth rate. Since Indian Independence, as many as 36 bills on population control have been introduced in Parliament.

The government’s use of mass forced sterilization during “the Emergency” long left an indelible mark on the public consciousness in India. Until recently, politicians had generally avoided the topic of population control as a political third rail as the issue was considered contentious and religiously sensitive.

In 2015, the ideological parent organization of the BJP, Rashtriya Swayamsevak Sangh (RSS), passed a resolution calling for the government to revise the country’s population policy due to “deep concern” over the “problem of demographic imbalance.”

In 2017, the BJP-led state parliament in Assam adopted a two-child policy, barring anyone in the state with more than two children from holding government posts.

A separate case filed by BJP leader Ashwini Kumar Upadhyay in the Delhi High Court earlier this year is seeking make the government adopt a recommendation made in 2002 by the National Commission to Review the Working of the Constitution (NCRWC) to add an amendment to India’s Constitution that would authorize the government to “secure control of population” through the “implementation of small family norms.” The PIL petition claims that population growth is “root cause of all crimes” in India. The High Court is expected to hear the case on September 3rd.

Population control stirrings are also heating up in India’s national Parliament. Last year, nearly 125 lawmakers in Parliament joined in signing a petition to Indian President Ram Nath Kovind, calling for a strict nationwide two-child policy. All petitioners were from the National Democratic Alliance, the coalition of right-wing parties led by the BJP.

Just last month, a BJP Member of Parliament (MP) in India’s upper house of Parliament introduced a bill, titled the Population Regulation Bill, 2019, which seeks to impose a nationwide two-child policy. Under the proposal, anyone who has more than two children would be barred from holding public office and would have public loan subsidies reduced, forcing them to pay back higher interest on bank loans. The policy would also impose a particularly heavy burden on the poor, penalizing families with more than two children with reduced food rations and kerosene rations. The MP who introduced the bill, Rakesh Sinha, is one of the 12 MPs in Parliament that are directly nominated by the prime minister.

In July, a member of the prime minister’s own cabinet, Minister of Animal Husbandry, Dairying, and Fisheries Giriraj Singh, stirred controversy after expressing to the media his blunt support for population control.

“I hold the view that those who have more than two children should be stripped of their voting rights,” Singh said according to The New Indian Express. “And this provision must be applicable to all communities. No exemption should be made for any religious group just because it insists that its tenets disapprove of birth control measures,” he said.

Hindu nationalist support for population control is in large part rooted in religious tensions and concern that the country’s growing Muslim and Christian populations dilute the nation’s Hindu identity and culture. Several politicians have expressed concern over a “population imbalance” resulting from lower birth rates among Hindus in comparison to Muslims.

In 2015, for instance, the far-right Shiv Sena party put out an editorial saying that the Muslim population in India will “result in the cultural and social imbalance of a Hindu nation” and that Muslims should adopt sterilization and family planning to have fewer children. The RSS 2015 resolution on population control also warned of “demographic imbalance” in allusion to the declining share of the Hindu population in India.

Many of India’s Muslim communities in turn view population control as tool of oppression that partisans of Hindutva use to limit their numbers.

Due to religious sensitivities, Hindu nationalist politicians often resort to thinly-veiled messaging when advocating for population control. In an interview with Al-Jazeera, MP Sinha said that maintaining “religious balance” was one of the reasons for his bringing forward of the Population Regulation Bill.

Despite BJP concern over population growth among Muslims, however, TFR has declined faster among Muslims than among Hindus. According to the National Family and Health Survey, TFR among Muslims fell by 1.79 children per woman between 1992-1993 and 2015-2016. Meanwhile, Hindu fertility fell by 1.17 over the same time period.

Many in India also mistakenly believe that population control is needed to prevent resource shortages, overcrowding, and civil unrest.

Additionally, food production of India’s major crops have more than doubled since 1990 while the amount of land used to grow crops in India has not increased at all. According to the Indian Ministry of Finance, per acreage yields have increased markedly for every major crop grown in India with the exception of rubber. Even so, per acreage yields for most of India’s major crops are well below the world average and India’s farmers still have plenty of room to improve annual crop yields.