Bella: Almost Too Good to Be True

Director Alejandro Monteverde’s new film, Bella is a movie that is going to be much talked about in pro-life, pro-family circles.  This film has swept even the secular film world off its feet.  Major producers however, are still hesitant to support anything that is not "mainstream."  Please do what you can to promote this film and its pro-life message.

Bella: Almost too Good to Be True

“If you want to make God laugh, tell him your plans.”  This line, spoken by Mexican actor Eduardo Verstegui, opens the movie Bella , one of the most phenomenal films I have ever had the privilege to experience.  The film is touring colleges right now to work up interest in its theatrical run, and I was able to screen it with about 200 students from Christendom College.  The experience was deeply rewarding to me, not only as a long-time film buff, but as a pro-life Catholic as well.

Back in August 2006, I was attended a private screening the film’s rough cut, and even then was floored by its grace, beauty, and simple depth.  Apparently the audiences at the Toronto Film Festival were, too.

In September 2006, that same unfinished cut moved audiences of every political and religious persuasion, and went on to win Toronto’s coveted People’s Choice Award.   To give an example of what an accomplishment this is, two of the many other films premiering at this  festival were Babel and The Last King of Scotland , both of 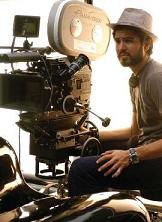 Director  Alejandro Monteverde knows only too well that

if you want to make God laugh,

you tell Him your plans.

which were highly acclaimed works that went on to win Oscars.  Thus, to see the film’s vastly improved final cut at Christendom College was an experience to remember.

Bella tells the story of a young single waitress in New York City who becomes pregnant, loses her job, and struggles with the decision of whether or not to keep her child.  In the meantime, she encounters a mysteriously compassionate Latino chef, who has suffered a tragedy in his past, and is perhaps the only person in her life who really cares about her.  During the course of the film, a decision is reached that will change both of their lives.

Bella is not only an artistic triumph, but a moral and spiritual one as well.  Metanoia films, the small production company responsible for the movie, states its mission as “to use film to make a positive difference in the culture and in peoples’ lives.”  The film contains none of the titillative sensuality or violence of many of its cinematic counterparts.  There is no blasphemy.  It depicts the family: intact, loving, and responsible, and contrasts it with the empty loneliness of individualism and promiscuity.  And it depicts abortion for the frightening, devastating, futile choice that it actually is. 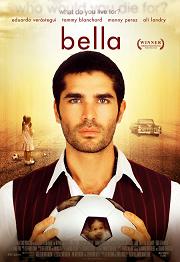 How did a crowd of some of the world’s most left-leaning elitists vote Bella the winner of the People’s Choice Award?

How did a film like this do so well in Toronto?  How did a crowd of some of the world’s most left-leaning elitists vote it the winner of the People’s Choice Award?

It would be an insult to the artistic integrity of Bella to call it a film with an agenda.  The movie refuses to put forward any of the tiresome socio-political mores that plague so many “serious” films today.  Simply put, there is nothing to argue with in Bella .  Without pontificating or moralizing, the movie is artistically direct, viscerally powerful, and steadfastly pro-life. There is no pretentious posturing, no hyper-aware political overtones.  It’s just simple, and powerful, stirring basic emotions that are fundamental to the human experience.  So fundamental, in fact, that audiences of all political persuasions have fallen for the film.

In the words of producer Leo Severino: “You can’t argue with life.”  At the end of the day, there is no argument to be made against the image of the child, the idea of the tiny human being growing within a mother’s body.  Life is universal, no matter how many people try to reduce it to a science or a math formula.  The film capitalizes on that fact, and gracefully but directly pulls us toward the inevitable truth.

But Bella needs help.  American theater companies have only agreed to carry the film in a limited distribution, and only as far east as the Midwest.  If they can raise enough interest in other places, interest to the point where seats in theaters are sold out, Bella can reach a much wider distribution.  Similar to The Passion of The Christ before it, whether or not the film will go to more theaters will all depend upon how well it does, and how much interest there is.

Call Metanoia films.  E-mail them.  Let them know how important this film is to you.  Organize church groups and youth groups, and get families to go see the film and promote it to their friends.  Interest and excitement about this movie is key.  If the response is mediocre, theaters will drop Bella quickly, before it has really had the chance to shine.  It is up to us not to let that happen.

Colin Mason is the Media Director at PRI.