39 years ago today, Indira Gandhi, then Prime Minister of India, received the power to rule by decree from the Indian president. She immediately declared a state of emergency, suspending numerous civil liberties. This freed her government to forcibly sterilize millions of Indian men and women in the 21 months that followed.

Public officials mobilized en masse to meet statewide sterilization targets. The sterilizations that followed were carried out under so-called “compul-suasion,” (a combination of compulsion and persuasion), with a heavy emphasis on the former.

Different states used different tactics. People in Rajasthan with more than three children were banned from holding any government job unless and until they had been sterilized. In Madyha Pradesh, irrigation water was withheld from village fields until sterilization quotas were met. In Uttar Pradesh, teachers were told that they must submit to sterilization or lose a month’s salary. Health department officials in Uttar Pradesh had their pay withheld until they met their quotas for sterilization. In the state of Bihar, public food rations were denied to families with more than two children. The local government refused to put in a much-needed village well until “100 percent of eligible couples” underwent sterilizations. [1,2]

In some cases even more brutal tactics were used. In a Muslim village in the state of Haryana, men were rounded up by police for sterilization. According to a report in the The Indian Express:

“The villagers of Uttawar were shaken from their sleep by loudspeakers ordering the menfolk—all above 15—to assemble at the bus-stop on the main Nuh-Hodol road. When they emerged, the found the whole village surrounded by the police. With the menfolk on the road, the police went into the village to see if anyone was hiding…as the villagers tell it, the men on the road were sorted into eligible cases. . . and they were taken from there to clinics to be sterilized.”[3]

Muslims, along with the illiterate and the lower castes, were disproportionately sterilized. Men were given vasectomies, while women were given tubal ligations.

Between June 25, 1975 and March 1977, an estimated 11 million men and women were sterilized using such tactics. Another 1 million women were inserted with IUDs.[4]

The sterilizations were performed in assembly-line fashion, in great haste, and in unhygienic conditions. There was no “follow-up care” offered whatsoever. Many men and women died from subsequent infections. Some 1,800 families filed wrongful death lawsuits on behalf of deceased relatives, but the actual death toll was much higher.

It did not take long, given these horrific tactics, for public anger over the forced sterilization campaign to result in riots. Over 20 people died, and many more were injured, in violent “anti family-planning” protests.  Prime Minister Gandhi called a halt to the campaign in March 1977, and was quickly voted out of office as soon as “the emergency” ended.

It is difficult for most people to accept that such a campaign could have occurred in living memory. But similar campaigns have been carried out in Indonesia and Peru even more recently, and are happening right now in China and Vietnam.

Many in the population control movement still believe that such campaigns are justified because of the danger posed by too many people. They are still repeating what apologists for the Indian program were saying at the time: “I’m personally opposed to forced sterilization but, after all, India is overpopulated.”

We at PRI believe that abuses of basic human rights, such as the right to bear children, can never be excused by such “ends justifies the means” arguments. Nor do we accept cost-benefit analyses which attempt to define (and thus denigrate) the worth of the human person in terms of dollars and cents as valid.

And let us not forget that, on the big question, the population controllers are simply wrong. If they were paying attention (instead of just mouthing anti-people slogans), they would understand that the most pressing population problem today is not too many people, but a rapidly aging world-population. Ignoring this reality, population controllers continue to espouse a myth that not only makes no economic sense, but literally kills those it targets.

Let us never forget the suffering, degradation, and humiliation inflicted upon the poorest and most vulnerable people in India beginning 39 years ago today. The only way to ensure that such violations cease is to end the war on people once and for all. 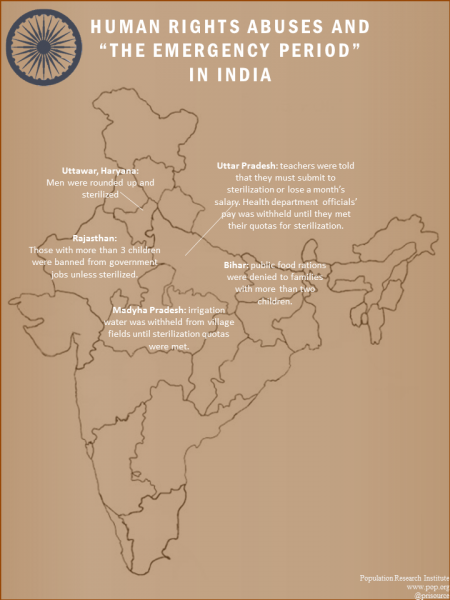