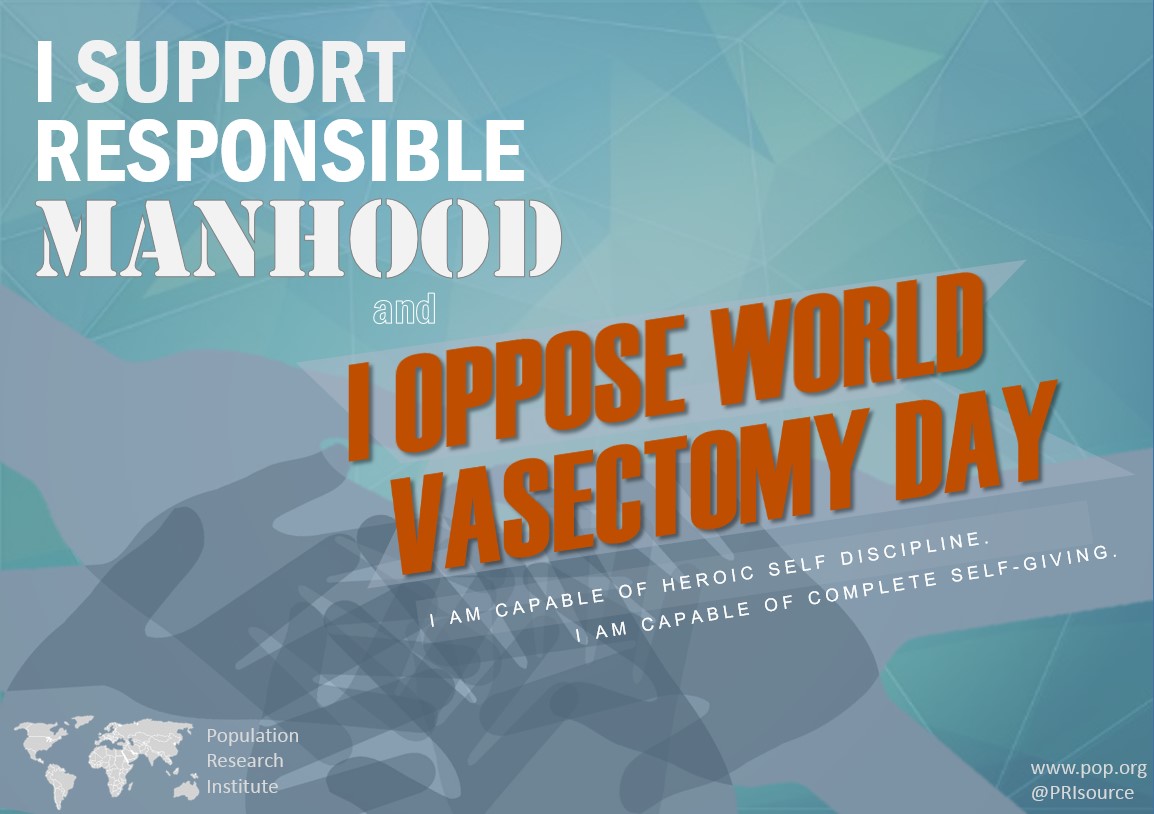 Today, November 7, 2014, is World Vasectomy Day. Touted as a means of population control, today is the one of the few times when population controllers specifically target men and encourage them to undergo vasectomies.

Population controllers are manipulating away men’s desirable ability to use self-control by promoting vasectomies. Vasectomies permanently eliminate a man’s control over whether or not to procreate.

Today’s World Vasectomy Day has not been endorsed by fatherhood organizations. Instead, it’s been endorsed by the usual suspects—groups like PopOffsets (an organization that seeks to minimize carbon output by minimizing people), Growth Busters, and Population Media Center. World Vasectomy Day is not about responsible manhood. It’s about population control.

United Kingdom
On November 4th, The UK overwhelmingly passed a bill making sex-selective abortions illegal. The law is a victory for pro-lifers, feminists, and all who oppose coercive and dehumanizing population control measures. In 1982, Oxford-educated Indian feminist Vina Mazumdar spoke out against sex-selective abortions, stating: “I could not help. . . raising the question whether amniocentesis [a form of sex-determination] was going to be used as ‘a final solution’ to the population question.”

United States
On November 3rd, Melinda Gates gave an exclusive interview with Reuters, explaining why the Bill and Melinda Gates Foundation pledged over a half billion dollars towards contraception in impoverished nations. She told the news agency that: “If you are a low-income country, the only way to get a better educated population of kids is to lower the number of kids you have.” The Bill and Melinda Gates Foundation is currently facing a lawsuit for unethical Human Pappiloma Virus (HPV) vaccine trials in India during which at least seven girls aged nine to fifteen died.

Namibia
Also on November 3rd, Namibia’s High Court ruled in favor of three HIV-positive women who had been sterilized without consent. “This decision by the country’s highest court is a victory for all HIV-positive women as it makes clear that public hospitals in Namibia have been coercively sterilizing HIV-positive women without their consent,” declared Jennifer Gatsi Mallet, the director of Namibian Women’s Health Network (NWHN).

“However, these three women are only the tip of the iceberg,” she added. “We have documented dozens of cases of other HIV-positive women who have been forcibly sterilized. The government needs to take active steps to ensure all women subjected to this unlawful practice get redress.”

Germany and Russia
Sunday, November 9th is the 25th anniversary of the fall of the Berlin Wall. A quarter century later, a lot has changed in the former Soviet Union. Although some of these changes were good, Russia’s public health system never recovered from the devastation of the past century. Make sure you’re up-to-date on their demographic and public health situations; read our briefings on Germany and Russia.