The United Nations must love Catholics, we give them their best ideas.

Hmmm. This conference, and its related International Year of Youth, bear an uncanny resemblance to a certain tradition that the Catholic Church has been practicing since 1986: World Youth Day. 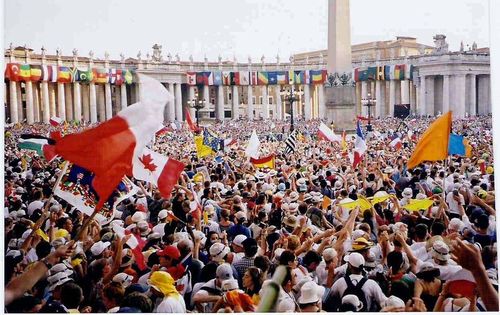 Take, for instance, the UN’s latest initiative, aimed at the world’s youth. The International Year of Youth was initiated by the United Nations at the end of last year, and officially began on August 12, 2010. According to the UN, the Year was initiated for the purposes of promoting “peace, freedom, progress and solidarity towards the promotion of youth development and the achievement of the Millennium Development Goals.”

And the year will be started off with a conference in Mexico City, from August 24th-27th, called the World Youth Conference.

Hmmm. This conference, and its related International Year of Youth, bear an uncanny resemblance to a certain tradition that the Catholic Church has been practicing since 1986: World Youth Day.

World Youth Day, started by Pope John Paul II, was designed to be an event where youth from all over the world could come together and celebrate their Catholic identity. Like so much of Pope John Paul II’s pontificate, the emphasis was on solidarity and a sense of Catholic unity. It was this unity that brought legions of youth together, from disparate backgrounds and widely separate countries, and it was this sense of unity that strengthened them to be faithful Catholics in an often hostile world. Young people leave World Youth Day invigorated, encouraged, and full of love of their faith, and for their fellow humans.

The United Nations has obviously seen the effectiveness of having such a powerful youth focus, and it would seem that the events of the International Year of Youth, particularly this World Youth Conference, were inspired directly by the Catholic event.

However, unlike World Youth Day, the UN’s approach is a false one, one that violates the very idea of a youth-centered event.

Here’s why. The Catholic event is a natural gathering, voluntarily attended by hundreds of thousands of youth who are filled, to varying degrees, with the same powerful faith. They come, uncajoled, unpaid, on their own initiative, out of the desire for grace and solidarity. Throughout the years, the event has never had fewer than 300,000 attendees; and has occasionally reached numbers as high as 5 million.

The UN event, on the other hand, is based around vague, secular goals, and represents an agenda-driven attempt to influence youth on a massive scale. Lacking the central fire of shared religious experience, values, and a sense of hope, the International Year of Youth can never hope to achieve the same grassroots effect so beautifully realized by World Youth Day.

One has only to go as far as the event’s literature to see why. The Youth Conference’s “Concept Note,” released by the Mexican embassy, calls the conference a “meeting point” where governments can “identify priorities of action for youth to be dealt with on the international development agenda beyond the Millennium Goals.” The “Millennium Goals” referred to here are the famous (or infamous) United Nations Millennium Development Goals, which were adopted in 2001 and have driven much of UN policy since then. Included in these goals is the ostensible desire to “improve maternal health,” which inevitably translates into addressing things like the “contraceptive prevalence rate” and the “unmet need for family planning.”

So in other words, the goal of the Youth Conference is primarily is a way for the United Nations to make its voice heard to a captive audience of youth. The aforementioned “concept note” lays out an agenda that is strictly one of goals and indoctrination topics, openly stating that the UN event intends to “promote the establishment of a mechanism that will provide specific follow-up for the youth agenda in the United Nations System.”

Mechanism? Specific follow-up? Youth agenda? This literature makes it obvious that the United Nations has no intention of allowing youth a place to live freely and flourish. Rather, it has specific talking points, and it won’t leave until those points are sufficiently lodged in the brains of impressionable youth. And, once again, those talking points represent an unending message of sexual promiscuity, abortion, population control and contraception: to an audience of even younger listeners.

As PRI’s president Steven Mosher points out, the UN’s connection to World Youth Day is superficial only. This is especially true since, instead of serving as a challenge to the youth of today, it will act as precisely the opposite: an enabler of their basest desires. “Instead of being urged to contribute to society,” Mosher says, “they will be urged to follow their own basest instincts, instead of being urged to self control they will be encouraged to let it all hang out. And instead of youth coming at their own expense great distances to be uplifted by the the Mass and the presence of the Pope, they will be paid participants who, much like the practitioners of the world’s oldest profession, will be dancing on someone else’s dime. Namely, yours and mine.”

This is not solidarity. It is indoctrination. And at the end of the day, it will be done with our tax dollars.