One of the favorite claims of the population control movement is that the world is running out of resources: food, energy, and space. “There is plenty of evidence to suggest that humanity is already exceeding the planet’s limits and that we are reducing the earth’s capacity to support life, including human life,” purported Robert Walker, the president of the Population Institute, in a recent debate with our own Steven Mosher.

These—and similar dire predictions—have been bandied about for over two hundred years. The overpopulation drum-beaters repeatedly claim the imminent end of humanity, perpetually predicting earth-ending disaster just around the corner. These predictions, unsurprisingly, have not come to pass.

One, of course, might be tempted to dismiss the claims of population alarmists as the warnings of well-funded but harmless cranks. One might be tempted to wave them away with a rather cynical sort of amusement if government officials did not take their claims as dark gospel—and if their vision of population control was not exported to poorer countries, often by force.

It is therefore important to understand why their relentless claims of impending disaster never come to fruition. Population controllers falsely assume an arbitrarily static model of technological growth, coupled with an endlessly growing population—a “population bomb” without any advances to sustain ever-growing hordes.

In a certain sense, they are correct—if society did not advance technologically, and the population grew indefinitely, then the human race would not be able to provide enough necessities for its continued survival.

But that has never happened. The pace of technological advance has grown faster over time, making larger populations possible. In fact, the pace of advance has grown faster than the pace of population growth. Today, the world population is the largest it has ever been, yet the proportion of humans living in absolute poverty is the lowest it has ever been. This remarkable reality derives from the fact that human beings produce, as well as consume.

Because humans alone have the beautiful capacity to innovate, population control policies harm the very people they claim to help. Technological advance always comes from humans; it can never spring up from any other form of economic capital other than human capital. Alas, many in the corridors of power have bought into the claims that undesirable people (by which they often mean poor people in developing countries) must be reduced, or else the world will end in a sea of asphalt.

In short, the population control movement will create the very future it fears if its policies are adopted: a society stuck in economic stagnation, relying on the ever-diminishing resource of human ingenuity. By thinning the human population, you destroy the future. Humans are the world’s greatest resource. 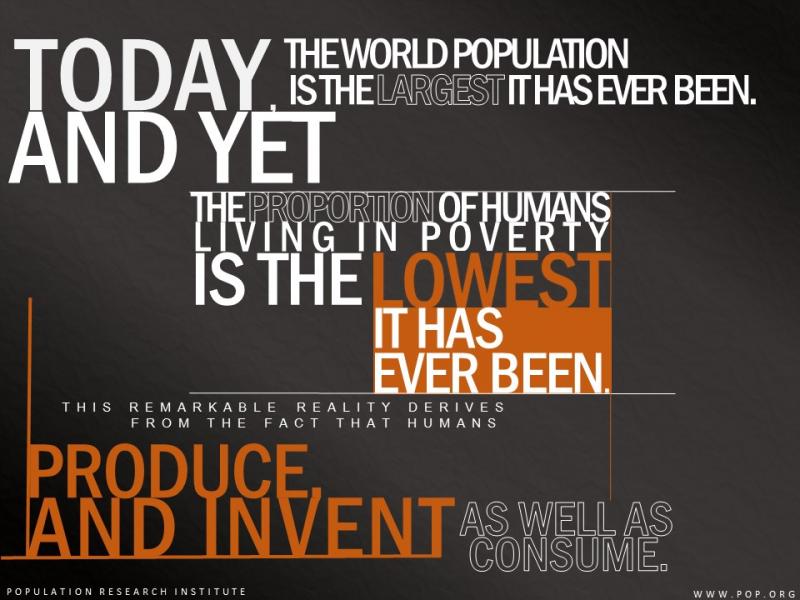