In many ways, South Korea is a great success story. Regular, peaceful elections have been held since the country transitioned to democracy in the 1980s, in sharp contrast to the despotic—some would say psychotic—regime in the north ruled by dictator-for-life Kim Jong-Un. The Samsungs and the Hyundais continue to roll off the assembly lines, shipped to consumers in the U.S. and around the world, and providing the South Koreans with one of the highest living standards in Asia.

And the number of Christians continues to grow. Nearly one-third of the population of 50 million—some 15 million people—now profess a belief in Jesus Christ. Of these, one-third are Catholic, part of the Pope’s worldwide flock, and the principal reason for his visit.

But this country—a success story in so many ways–hides a secret shame: South Korea has the highest abortion rate in the world. Nearly half of all pregnancies end in abortion. Each year, almost as many Korean children are aborted as are allowed to see the light of day.

This Pope understands that actions speak louder than words. (Think about his participation in Rome’s "March for Life" last year.) He knows that his visit to a “Cemetery for Aborted Children” will call attention to this ongoing tragedy.

The sheer dimensions of this South Korean holocaust are stunning. One source gives a figure of 340,000 abortions for 2012, a year in which the entire country only saw 440,000 live births.[1] Perhaps 20 million children have been aborted over the last half century, a huge number for a country which is only the size of Indiana or Portugal—and over six times the number of military and civilian casualties the country suffered during the Korean War.

The number of abortions is little more a than guess-timate, however. No one knows the actual death toll with any precision, since nearly all of the abortions performed in South Korea are technically "illegal." The country’s laws only permit abortion in cases of rape or incest, when a woman’s health is in danger, or when a pregnant woman or her spouse has certain communicable or hereditary diseases. No one keeps records.

The restrictions have been in place since 1953, but they are almost completely ignored in practice. Abortionists openly advertise their services in big cities like Seoul and Pusan. Many Korean women have had repeat abortions. And the authorities, for the most part, turn a blind eye.

So what is going on? Why is the world’s worst abortion holocaust taking place in a country where most abortions are illegal?

Back in the late 1960s, South Korea came under tremendous pressure from the United States to reduce its birth rate on the grounds that it was “overpopulated.” (It wasn’t “overpopulated”, of course, it was merely poor.)  The South Korean government went along with Uncle Sam and adopted a two-child policy. In reality it had little choice, since in those early years the U.S. forces were the only thing standing in the way of continued North Korean and Chinese aggression.

Abortion quickly became the primary means of birth control, as couples sought to conform to the new two-child norm. The abortion holocaust had begun.

Today, a half century later, most Koreans understand that the two-child policy was a tragic mistake. Bishop Peter Kang U-il of Cheju, for example, who serves as president of the Catholic Bishops’ Conference of Korea, said recently that the nation faces "a national disaster" because of "government policies over the years."

The South Korean birth rate, at only 1.25 children per women, is among the lowest in the world. South Korea’s population is aging rapidly; its workforce is shrinking, and its population has started to decline.

In the face of such dismal numbers—which portend a kind of gradual national suicide–the government has reversed itself. Not only has it abandoned the two-child policy, it is now actually offering incentives to families to have more children. It is even beginning, in fits and starts, to crack down on illegal abortions.

It seems like a case of too little, too late. Abortion has become a way of life in Korea. The cemeteries for the unborn continue to fill up. And yet …

It is customary for the Pope to visit the shrines of martyrs. The Cemetery for Aborted Children is, in one sense, just such a shrine. For the children to whom it is dedicated are tiny martyrs to a population control program run amok.

They died when their parents—urged on by their government and our own—decided that they were extra baggage on the road to riches.

Pope Francis’s visit to the cemetery will shine a light upon the Korean abortion holocaust and, I pray, help bring it to an early end. After all, the theme of the Pope’s trip is: “Rise Korea, clothe yourself in light; the Lord’s glory shines upon you.”

If Korea embraces that light, there will be no room for the darkness of abortion. 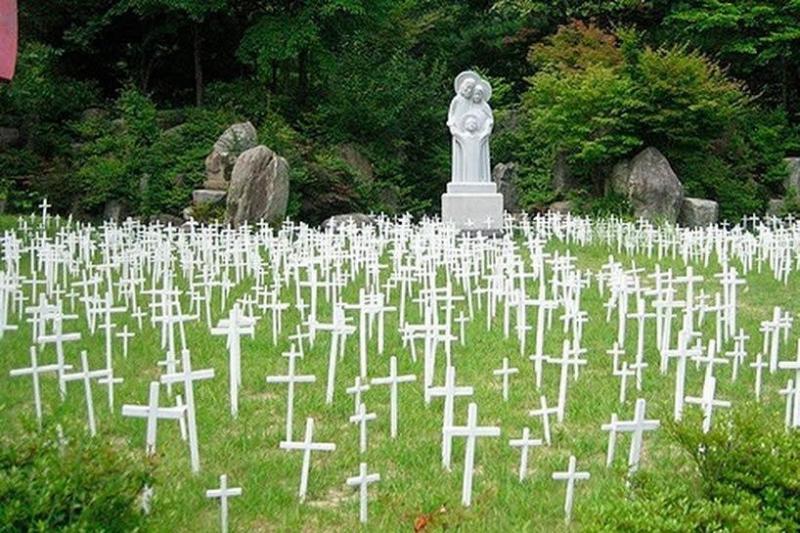 This article was originally published on www.Aleteia.org and is reprinted with permission. All rights reserved.