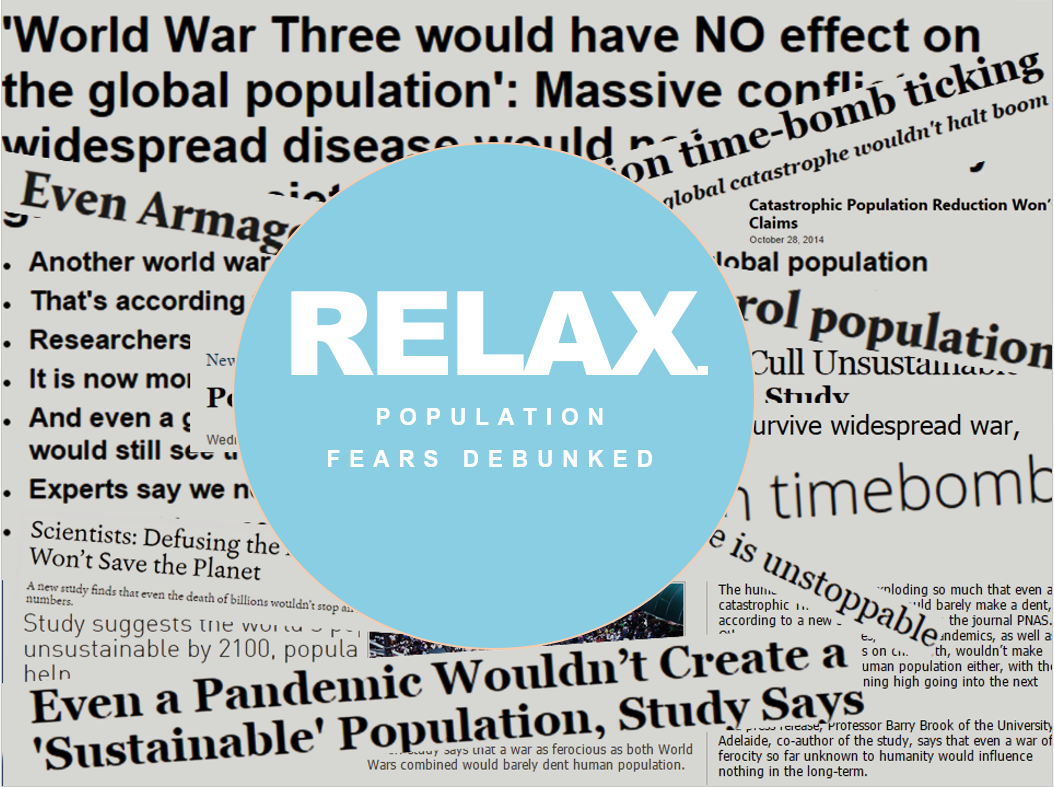 A steady stream of headlines are hyping a new journal article that claims that the world population is a terrifying goliath resolutely stomping towards human destruction. Written by two environmental scientists in Australia, Corey Bradshaw and Barry Brook, and edited by Paul Ehrlich, (a Stanford zoologist famous for his sensationalist claims about population growth in the 1970s) the article is the academic equivalent of a sensational tabloid article.

We here at the Population Research Institute have read both the journalistic commentary and the original article. We created the following primer to walk you through the smoke and mirrors to the actual facts.

Quote 1: “Roughly 14% of all the human beings that have ever existed are still alive today.”

Facts: Bradshaw commented on this statistic in his article saying, “Global population has risen so fast over the past century that roughly 14 per cent of all the human beings that have ever existed are still alive today – that’s a sobering statistic.” The statistic is not sobering, but elating; humans are “still alive” who would not have been a hundred years ago. In other words, there are so many people because we are living so much longer. Over the last 50 years, the average world life expectancy has increased by over 20 years.

Quote 2: “One of the problems is that there is still a large unmet need for more expansive and effective family-planning which has been previously hindered by . . . premature claims that rapid population growth has ended.”

Facts: The claims that rapid population growth has ended are not premature, but timely and factual. The world fertility rate halved over the past 50 years, from a world average of about 5 children to today’s world fertility rate of 2.4. Half of the world population lives in a country with total fertility rate below replacement level (2.1). Unless trends reverse, half of the world’s population lives in countries that will experience negative natural growth rates in the next 50 years. The full-effects of current low-fertility are only starting to become visible; most countries with below-replacement fertility haven’t started shrinking yet only because previous generations haven’t died from old age yet.

Quote 3: “The most striking aspect of the ‘hypothetical catastrophe’ scenarios was just how little effect even these severe mass mortality events had on the final population size projected for 2100. . . [The] projections all produced between 9.9 and 10.4 billion people by 2100.”

Facts: This part of the paper is receiving the most media attention, because doomsday predictions always sell. The authors of the article created population projections to estimate population numbers after a catastrophe, and concluded that even a war with 2 billion casualties wouldn’t dent population numbers.

However, when Bradshaw and Brook created their projections of a post-apocalyptic population, they made some sketchy assumptions. When describing their methodology for creating apocalyptic population projections, they write: “Although potentially exaggerated . . . we (arbitrarily) assumed that fertility would double.” Their presumed apocalyptic disaster didn’t shrink the population by 2100 because the authors arbitrarily (their words, not mine) presumed that world fertility would double.

Facts: Population numbers respond slowly to changes in fertility, but—after a lag—even slight changes in fertility rates drastically shape population sizes. If world fertility fell by another 1.4 children (from its current 2.4), the next generation would grow old in a world that has half as many people as it does today.

Population policies need to be based on facts, not hysteria and bad science. Demographers know that world population growth is plummeting, and human rights advocates know that population control programs are responsible for more systematic human rights abuses than any other policy this past century. Yet Brook and Bradshaw are fanning the fact-free fire of population hysteria. Let’s put out the fire and end the myths that pave the way for human rights abuses.