For most of the world, today is Friday, a happy day that leads into the weekend. For Paul Ehrlich and Dr. Doug Stein, however, today is World Vasectomy Day!

Their video on the website WorldVasectomyDay.org does not pretend that vasectomies are for men’s health or for healthy relationships. Instead, with cheery colors, the video highlights “population” as the problem behind “global warming, war, and poverty,” and prescribes vasectomies as the cure.

“It all comes down to human beings,” they claim, “For too long, people have stopped talking about the population of the planet!…Are you willing to put your balls on the line for Mother Earth?” 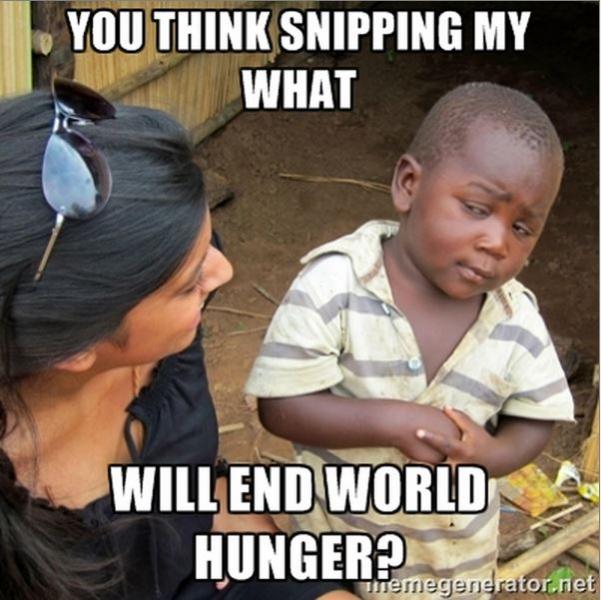 As a woman, that appeal really doesn’t work for me. Besides, the earth isn’t overpopulated.

But there are points of convergence between the vasectomists and Population Research Institute. We agree that “we need to take better care of the people already on the planet,” for example. We just disagree on how that should be accomplished.

While the vasectomists advocate eliminating people to get rid of poor people, we at PRI think this approach is analogous to, well …  throwing the baby out with the bathwater.

We believe we can adequately take care of our existing population and our future generations by exercising our ingenuity and responsibly drawing upon the cornucopia of natural resources with which the world is blessed.

The anti-people ideology of World Vasectomy Day is not a joking matter; it causes real harm.

Such programs distract from real aid. Last year, USAID requested $1,350 million for maternal and infant health, family planning and reproductive health while requesting only $670 million for malaria and $95 million for nutrition.

WorldVasectomyDay.org features an extreme case: a man who had 26 children before he got a vasectomy. How many people do you know who have had 26 children? Vasectomies provide band-aid solutions to real problems.

Not only do such ideologies distract from real problems, like poverty and war, they also fuel the dangerous ideology of overpopulation that has been at the root of every sterilization camp and forced abortion in this century. As PRI’s President, Steven Mosher, wrote of China’s attempt to reduce their population growth: “The history of the People’s Republic of China has been marred by a long series of violent political campaigns, but none has been more violent, none has claimed more victims, and none lasted a fraction as long as the one-child policy.”

As Yale historian Paul Sabin writes of Ehrlich, “His instinct to blame sheer numbers of people, rather than their state of culture or government, represented a shift in emphasis underway in Western thinking.”[1] Yes, Ehrlich marks a change in our culture away from food aid and towards forced sterilizations. Ehrlich’s lecture today is entitled, “Is it naïve to think we can cap the population?”

At its best, the ideology of World Vasectomy Day sells fake solutions for real problems. At worst, it fuels coercive sterilization campaigns such as those which regularly take place in India and China.

On the first World Vasectomy Day, let’s not forget that one-fifth of the world suffers under China’s draconian one-child policy, undertaken in the name of curbing a mythical “overpopulation.”

[1] Paul Sabin is an associate professor at Yale University and author of the recent book The Bet: Paul Ehrlich, Julian Simon,and Our Gamble over Earth’s Future.