The forced abortion campaign hit the southern Chinese province like a deadly hurricane. The provincial government decided that too many babies were being born. Local officials were warned that population control quotas had to be met or their heads would be on the chopping block. They reacted by hunting down and arresting hundreds of women for the crime of being pregnant. Taken by force to hospitals and clinics, these were aborted against their will. It did not matter whether the women were past the point of viability, or even whether they were already in labor. Their babies were killed all the same.

The above could stand as an accurate description of what I witnessed in China’s Guangdong province in 1979-80. In reality, it is what is happening right now in the neighboring province of Guangxi. And what has happened in county after county, province after province, over the past 27 years. The one-child terror campaign that started back in 1980 continues to the present day, violating women and tearing apart families throughout China.

Guangxi’s proximity to Hong Kong allowed  word of the Communist crackdowns to leak out.

In fact, the only thing unusual about this latest campaign is how quickly news of these atrocities spread outside of China. Guangxi province is not far from Hong Kong. No sooner had the campaign begun in May of this year than word reached the former British colony and from there the outside world. Guangxi, like Guangdong and Hong Kong, is Cantonese speaking. It is also one of the more developed regions of China, where many people have cell phones and access to the Internet. It was by these means that the victims of the terror campaign communicated their suffering to the outside world.

National Public Radio, the taxpayer-funded alternative to Rush Limbaugh, actually ran a story on the campaign on its Morning Edition show. This described in harrowing detail the plight of Guangxi resident Wei Linrong.  She and her husband, Liang Yage, already had one child but wanted a second. Mrs. Liang was arrested when she was seven months pregnant and forced to abort her child.  The Liangs are Christian, NPR reported, and do not believe in abortion.

The Hong Kong and foreign press also reported how local officials were imposing punitive fines on those who had already given birth to second children.  These fines were, in some cases, equivalent to several years’ income.

In response to these heavy-handed tactics riots broke out in 28 towns throughout the region.  Thousands went on the rampage, storming government buildings, breaking windows, smashing furniture and vandalizing vehicles. Some rioters even tried to set buildings on fire. To quell the unrest, the regional government called in hundreds of armed police. 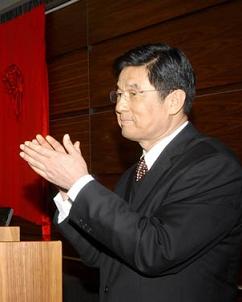 Tian Congming, President of Xinhua News Agency.  This Agency claimed that the Chinese who rioted against the one-child policy were only to be "re-educated."

The sympathy of the foreign press was obviously with the victims of forced abortions. NPR’s Morning Edition told not just the Liang’s story, but other tales of Chinese women whose babies were aborted weeks, sometimes days before they were due to be born.  The Los Angeles Times published full-color photos of the riots and printed the stories of peasants who had “finally had enough.”  Even the New York Times finally got into the act with a long piece about the tragic inner-city abortion rates among young, unmarried Chinese women.  (It apparently took the Times several days to figure out a pro-abortion slant.)

The official Xinhua News Agency, reacting to the foreign media coverage, went into damage control mode. Xinhua claimed that only 28 people were arrested in the aftermath of the riots, a number which seems ridiculously low under the circumstances.  Xinhua also suggested that instead of jail terms the misguided villagers were to get counseling:  4,200 Communist Party cadres had been dispatched to the area to engage the villagers in dialogue about their complaints and ease tension in the 28 troubled towns. Xinhua did not reveal whether these cadres were armed.

Those arrested, whether 28 or, more likely, several hundred in number cannot expect to be treated well in jail.  A blind attorney, who has been one of the leading activists in China against forced abortions, was recently severely beaten while in jail.  Human rights groups say prison officials ordered fellow inmates to beat him after he resisted having his head shaved and insisted on his legal rights.  This is unusual only in that the officials themselves did not administer the beating.

How many more millions of women will have to suffer forced abortion before China’s leaders realize the bankruptcy of the policy they adopted so long ago?

It is dangerous to question Communist Party policy, but some inside of China are doing so.  These include Ye Tingfang, a professor at the Chinese Academy of Social Sciences (CASS).  Professor Ye was recently quoted as saying that “In the beginning, it was believed that our big population would be a hindrance to our economic development. But over the past decades, experience has told us otherwise.  Japan, for instance, has little in the way of resources and boasts one of the highest population densities in the world, but it is a thriving economy and one of the richest nations. Labor is the most important source of wealth.”

Or, to put it another way, human beings are the ultimate resource.

Steven Mosher is the President of Population Research Institute.