No Choice For Teen Mothers

NO CHOICE FOR TEEN MOTHERS

The topics of unplanned pregnancy and teen motherhood have always been politically sensitive ones for our morally schizophrenic nation, a nation that has the highest rate of teen pregnancy of any developed country. On the one hand, conservatives hold that the skyrocketing rates of teen pregnancy are the fault of comprehensive sex education programs, laissez-faire attitudes toward contraception and abortion, and a general aimlessness in matters of sexual morality. However, once conceived, the unborn baby is a human person whose intrinsic worth must be recognized, even if the teen mother elects to put the child up for adoption.

Liberal feminists, on the other hand, believe that these rates of unplanned pregnancy arise from a pervasive ignorance of the mechanics of sex, and an even more widespread ignorance of contraception. It should be the individual choice of every teenager, they say, whether or not they keep, abort, or put their baby up for adoption. This choice is their inalienable right, unassailable by state, spouse, boyfriend or even parent.

At least, that’s what they say.

Closer examination of this feminist position shows that feminists, too, have very strong ideas as to what teen mothers should do with their babies. They should abort them.

Consider the recent rash of highly-publicized celebrity teen pregnancies. From Keisha Castle-Hughes, the 16-year-old who portrayed the Virgin Mary in The Nativity Story, to Jamie Lynn Spears, the younger sister of infamous pop star Britney Spears, more and more teen celebrities are announcing unplanned pregnancies—and choosing not to get abortions. In addition, Hollywood seems to have jumped on the bandwagon, releasing several films in the last year that deal favorably with this subject. Movies like Bella, Knocked Up, Waitress, and most recently Juno all showcase young single mothers who face unexpected pregnancies, and all choose to carry the baby to term.

Oftentimes these the creators of these films, like the young pregnant celebrities, wouldn’t call themselves pro-life or even very conservative. Nevertheless, the choice to keep their new life, in reality or onscreen, was the path that they chose.

There, apparently, lies their crime.

The outrage arising from the feminist community is truly breathtaking. Feminists are bemoaning, not that these girls have no choice, but that they have refused to make the right one. 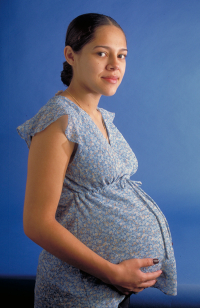 Apparently pregnancy is the one option women are not allowed to choose.

"Having to be a selfless parent is totally contradictory to the development of a teenager," psychotherapist Linda Perlman Gordon said to AP, concerning the pregnancy of Jamie Lynn Spears. "To do it right, she’s got to subsume her needs. She’s going to have to give up the part of growing that would have allowed her to become an autonomous, independent person."

Demie Kurtz, a feminist sociologist from the University of Pennsylvania, agrees. "Do we want to put burdens on these teenage girls by encouraging them to think that having a baby is cool?" she asks. "There should be a responsibility to portray a young person who makes a reasonable choice to have an abortion, or take the morning-after pill."

Never mind that these are women would have been quick to defend a woman’s right to abort her child against the "judgment" of pro-lifers. It is ironic that when a teen mother chooses not to kill her unborn baby, the purported defenders of women’s choice are the first to judge her.

Incredibly enough, this umbrage extends even to young teens who choose to put the child up for adoption. It would seem that feminists are not simply looking to spare teens from the vagaries of single motherhood, but they are firmly set against them having babies at all.

The film Juno, for instance, involves a young girl who contemplates an abortion, only to decide at the last minute to give and give the child to a well-to-do woman who has been trying to adopt. Juno took a beating by many feminists, who disliked the fact that the film’s title character decided to have her baby, even though she gave him up for adoption.

"The movie made me really mad," writes "Mark" of The L Magazine‘s Blog About Town. "At first, we laugh at the solitary picketer [a pro-life protester outside the abortion clinic] . . . and while we’re chuckling to ourselves, whoops, turns out Juno, good as she is at heart, gets cold feet about the whole baby-killing thing."

The assertion that the otherwise "good-hearted" Juno loses credibility by refusing to kill her child is breathtaking in its ideological myopia. Although this writer would undoubtedly call himself "pro-choice," what he advocates is no choice at all. Abortion is the only responsible option for unwed teen mothers, he implies. Even adoption is out of the question.

Frighteningly, these incidents only bring out a trend that has already been festering amidst the abortion debate. These feminists are tied so tightly to the abortion agenda that all roads must lead there. In these cases, abortion is a kind of perverse "street cred," a rite-of-passage that a girl, if she is really serious about her femininity, will have to undergo. When feminists tremble at the thought that pregnancy might become "cool," what they are really afraid of is the idea that a young girl might catch a glimpse the lingering beauty of motherhood. When that happens, she will reject abortion for what it is: the murder of an innocent child.