WASHINGTON, D.C.: Population Research Institute is pleased to announce the release of the second edition of Steven Mosher’s best-selling book, A Mother’s Ordeal: One Woman’s Fight Against China’s One-Child Policy, complete with a new preface by the author. 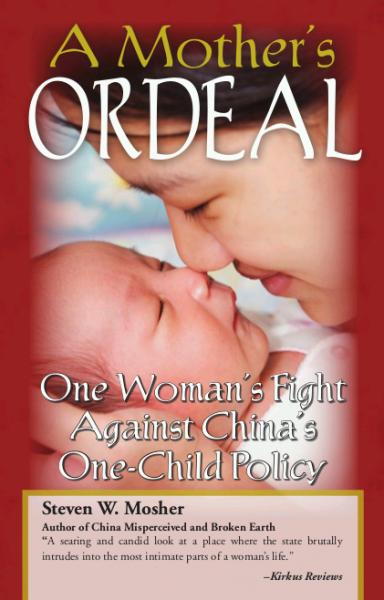 A Mother’s Ordeal brings home the suffering caused by China’s population control policy by viewing it through the eyes of Chi An. A family planning official, Chi An tells an insider tale of how young, pregnant women were arrested, confined, and bullied into abortions and sterilizations that they did not want. But when Chi An became pregnant with a second child, she left the country to avoid becoming a victim of the same policies that she herself had enforced.

A Mother’s Ordeal is just as relevant today as it was when it was first released. The one-child policy continues, despite recent changes that allow more couples to apply for a permit to have a second child. Some in the media have hailed—prematurely—the end of the one-child policy. But the horrors told within A Mother’s Ordeal have not ceased with the issuance of a few extra birth permits.

According to Anne Morse, media coordinator for Population Research Institute, the book is a must-read: “A fifth of the world’s population lives under a population control regime that has killed millions and wounded everyone in its path. If there is one policy that everyone has heard of, but few understand, it is China’s one-child policy. No one who reads A Mother’s Ordeal will ever forget the human face of this ongoing tragedy.”

Steve Mosher, who himself witnessed forced abortions in China, says, “Chinese officials estimate they have sacrificed at least 400 million preborns and newborns in their misguided attempt to jumpstart the Chinese economy. They continue to abort 13 million children each and every year. But numbers alone cannot tell the whole story. I left China with the cries of helpless mothers ringing in my ears. As you read A Mother’s Ordeal, you will hear them crying too.”

You can purchase A Mother’s Ordeal  at: pop.org/amo.