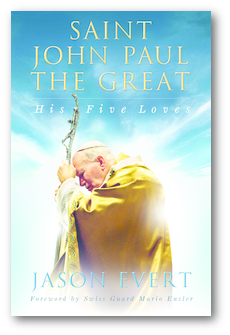 May I send you this gift? The timing couldn’t be
better with Pope John Paul II having just been canonized!
It’s a brand new book by Jason Evert called Saint John Paul
the Great — His Five Loves. Jason Evert is the author of many
best-selling titles, including Theology of the Body for
Teens. Plus, you probably know of Jason Evert from his
appearances on EWTN, Fox News and other media outlets.

As the title says, you’ll learn of
John Paul’s five greatest loves — one of which was his
love of young people. Can you guess
what the other four are? All of them
are revealed and discussed in depth in Saint
John Paul the Great — His Five Loves.

You’ll also read never-before-told
stories of how Saint John Paul was a constant thorn in the side of
Poland’s Communist dictators … how John Paul showed his
gratitude to his Swiss Guards … St. John Paul’s private
request to Padre Pio for his intercession on behalf of a woman dying
an agonizing death following years of Nazi “medical”
experiments … the special gift John Paul had for touching the
hearts of young people …

… heartwarming stories from St. John Paul’s
World Youth Days in The Philippines, Mexico, Toronto and Denver (did
you know that Church officials pushed hard for Cleveland
as the site of that World Youth Day — until John Paul put his
foot down and insisted on Denver? That story is revealed in this
fascinating book.) … what John Paul did during his trip to
Baltimore that drove Secret Service agents to near panic … John
Paul’s admission of feeling uncomfortable in the presence of
sick people — and how he overcame that …

… You’ll learn of his absolutely
astounding
personal prayer schedule … the importance of human suffering, in
John Paul’s own words … you’ll feel as though you’re
in a time capsule as Saint John Paul the
Great — His Five Loves helps you
re-experience your feelings when you learned of the attempt on his
life, and also when you heard the news of his death … you’ll
learn the last two works he ever wrote and the circumstances under
which he wrote them …

With this book you’ll also benefit from a concisely-written
explanation of John Paul’s theology of the body … and
John Paul’s humor shines through in Saint John Paul the Great
— His Five Loves with little-known stories of how our newest
saint maintained his good cheer, even when he was at his sickest. And
of course there are photos of St. John Paul in this book — 16
photos in all, many of which you’ve probably not seen
before.

Saint John Paul the
Great — His Five Loves comes with
the highest praise from Chicago Cardinal Francis George who says,
“Reading this book, those who knew him (St. John Paul) will
find themselves smiling and nodding; those who never met him will
come to know him.”