Join Us At The March

JOIN US AT THE MARCH! 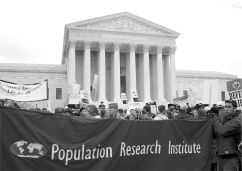 On January 22, 2008, pro-choicers will unite across the nation in celebration of the 35th birthday of the infamous Roe vs. Wade decision, the decision that effectively legalized abortion-on-demand in the United States.

In response, Population Research Institute would like to urge pro-lifers, as we do every year, to join together in Washington D.C. for the 35th annual March for Life. The March is the largest continuous pro-life demonstration in the United States, and possibly in the world.

We believe that ever-rising attendance of pro-lifers at the March for Life, especially among the nation’s youth, proves that the dedicated work of pro-lifers, day in and day out, is really making a difference. Last year, a reported 200,000 people attended the March for Life. Let’s see if we can make the number even higher this year and in years to come.

PRI’s camera crew will be at the March as well, documenting this pivotal event, so often ignored by the mainstream media. So share your thoughts with our cameraman, and you may be featured in the upcoming YouTube video!

Above all, keep the pro-life movement in your prayers on January 22, 2008, as our nation enters its 35th year of legalized carnage. May our efforts, united with those of our pro-life brothers and sisters, bring a swift end to the atrocity of abortion.