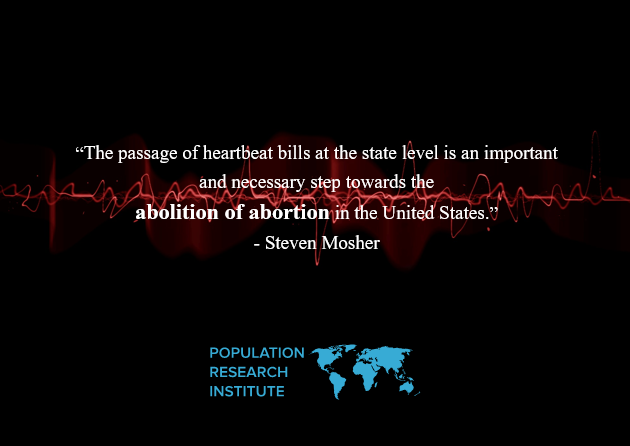 Abortion Would be Banned After Fetal Heartbeat Can Be Detected

Place your hand on your heart for a moment…a beating heart is a sign of life. Nothing could be more obvious. Yet the beating hearts of thousands of unborn children are stilled through abortion every day.

Since the beginning of time, whether someone is alive or dead has been determined based on the presence or absence of a heartbeat. A new bill introduced in the Indiana State Senate seeks to acknowledge these facts: It states that human life should be protected from the moment that a heartbeat can be detected.

As the Indiana General Assembly for the 2016 Session opened, State Senators Jim Banks and Scott Schneider introduced the Indiana Heartbeat Bill ( S.B. 144). The bill would make abortion illegal when a heartbeat can be detected. The only exceptions allowed are cases where continuing the pregnancy would threaten the life of the mother or cause serious, long-lasting consequences for the physical health of the mother. State Representative Curt Nisly introduced a companion bill (H.B. 1122) in the Indiana State House.

Says Senator Banks, author of S.B.144: “[This Heartbeat Bill] is an important step in reducing the number of abortions and will continue to make Indiana one of the most pro-life states in the country.”

To prevent abortionists from resorting to their usual tricks and exploiting loopholes, the Indiana Heartbeat Bill would require all abortionists to test for a fetal heartbeat before attempting to procure an abortion. Abortionists would be required to record test results as well as the method they used to detect a fetal heartbeat and the time and date of the test. They would also be required to determine the estimated gestational age of the “unborn human individual” and would have to communicate to the mother the statistical probability of carrying her child to term. Abortionists who fail to perform a fetal heartbeat test (except in cases where the mother’s life is in danger) would be liable to committing a Level 5 felony under the Indiana State Code.

Depending on the method used to detect a fetal heartbeat, the Indiana Heartbeat Bill could protect the unborn as early as six weeks gestation. Some methods, however, may not detect a heartbeat until several weeks later.

Researchers have found that approximately 97%[1] of pregnancies with a confirmed fetal heartbeat at 9 weeks gestation result in live birth. Among women with no symptoms of threatened miscarriage, one frequently cited study[2] published in Obstetrics and Gynecology, the official journal of the American College of Obstetricians, found only one-half of one percent of pregnancies with a fetal heartbeat at 9 weeks gestation resulted in miscarriage and fewer than 2% at 8 weeks gestation.

Another study found that less than 4% of clinically diagnosed threatened miscarriage pregnancies resulted in a miscarriage prior to 20 weeks after a heartbeat was detected between 6 and 14 weeks gestation.[3] The presence of a fetal heartbeat is a very strong indicator that a child will survive to birth.

These studies, among many others, call into question the Supreme Court’s flawed definition of viability at 24 weeks in Planned Parenthood v. Casey, and the flawed trimester analysis used in Roe v. Wade.

“A country whose founding documents guarantee its citizens the right to life should not be condemning hundreds of thousands of them to an untimely death,” says PRI President Steven Mosher.

The Indiana Heartbeat Bill could save thousands of lives every year, assuming that the best methods for early detection of fetal heartbeat are used. According to data from the Centers for Disease Control and Prevention (CDC) on abortion incidence in the United States, 6,842 unborn lives (over six weeks gestation) were terminated in induced abortions in the state of Indiana in 2012.

“It is time we stop looking at abortion like something we can manipulate and start reversing the mindset that murdering human life is somehow ok,” says Amy Schlichter who inspired the creation of the Indiana Heartbeat Bill, “The voice for children has momentum and is growing rapidly. Indiana will know that Hoosiers care about Hoosier babies.”

With the introduction of the Heartbeat Bill in the General Assembly, Indiana has become the 11th state to propose heartbeat legislation, and the 12th to propose that the unborn should be recognized as living persons or that such persons possess human rights when a heartbeat is present. If passed, S.B. 144 would make Indiana the third state to adopt heartbeat legislation.

“It is our role and duty as state legislators to introduce legislation in defense of life,” Senator Banks said.

According to Sen. Banks, even if the Heartbeat Bill does not pass the General Assembly in its current form, S.B. 144 and like legislation could serve as the impetus for advancing smaller steps in the protection of unborn life. “[Even] that would be a huge victory,” Banks remarked, “I look forward to the debate on how to reduce the number of abortions.”

Arkansas approved the nation’s first heartbeat bill in 2013 when both houses of the state’s legislature voted overwhelmingly to pass a law prohibiting abortion after a fetal heartbeat is detected after 12 weeks gestation. Later that year, North Dakota passed a similar measure protecting the lives of the unborn as early as a heartbeat can be detected. The measure was signed into law by North Dakota Gov. Jack Dalrymple.

Both the Arkansas and North Dakota heartbeat laws have been blocked by injunctions from the Eighth Circuit Court of Appeals preventing them from taking effect. Late last year, Arkansas Attorney General Leslie Rutledge and North Dakota Attorney General Wayne Stenehjem petitioned the Supreme Court to lift the injunctions placed on the duly passed heartbeat laws of their respective States.

Last year, videos released by the Center for Medical Progress revealed to the world that organ and tissue harvesting are routinely conducted at many Planned Parenthood clinics across the country. In one video, Holly O’Donnell, an ex-Procurement Technician for Stem Express, LLC revealed that she had been instructed to harvest a brain from a fetus with a beating heart. Heartbeat legislation like S.B. 144 would have prevented later gestational age organ harvesting such as those seen in many of last year’s CMP videos.

“The passage of heartbeat bills at the state level is an important and necessary step towards the abolition of abortion in the United States,” says Steven Mosher. “It will force the Supreme Court to revisit its faulty Roe v. Wade decision as well as provide the scientific grounds for overturning it.”