History will one day view abortion with the same disgust with which we now look back upon frontal lobotomies.

In November of 2005, National Public Radio did a story on a man named Howard Dully, an unassuming, 350-pound bus driver in California. Dully’s story? At the age of 12, he was one of the youngest patients to receive one of psychiatrist Walter Freeman’s infamous “ice pick” lobotomies.

Freeman, who was “equal parts physician and showman,” specialized in what he called “transorbital lobotomy.” Convinced that mental illness was caused by “overactive emotions” in the prefrontal cortex, Freeman took it upon himself to calm these emotions by severing the connections between the prefrontal cortex and the rest of the brain. First he hammered an ice pick through the orbit of the eye with a rubber mallet. Then he wiggled it vigorously around, using its sharp point to destroy fragile nerve tissue.

Freeman delighted in this barbarity, which at the time was hailed as a new miracle procedure, “easier than curing a toothache.” According to NPR, “Freeman was a showman and liked to shock his audience of doctors and nurses by performing two-handed lobotomies: hammering ice picks into both eyes at once. In 1952, he performed 228 lobotomies in a two-week period in West Virginia alone.” 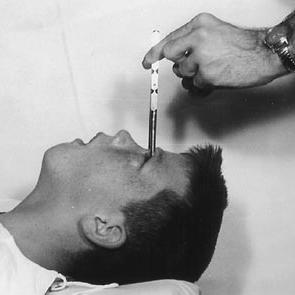 Howard Dully undergoing an ice-pick lobotomy at the hands of Walter Freman.

Freeman moved on to use the procedure indiscriminately on patients with only minor emotional problems, including the interviewed Howard Dully, who was forced to undergo the process simply because his stepmother insisted that he was “defiant and savage looking.” I know several prepubescent boys who fit that description.

Most people today recoil against the idea of hacking away at the brain with an ice pick. At the time, however, leading medical authorities insisted that the practice was the cutting edge of modern medicine. (No pun intended.) Freeman himself was considered a visionary, the practitioner of a painless procedure that would better the lives of thousands of mental patients. It was only after performing over 2,500 lobotomies, some of which left their recipients dead, that Freeman was forced to retire.

The primary beneficiaries of Freeman’s ice-pick lobotomies were not the mental patients themselves, but their caregivers. With their charges rendered dull and docile, if not reduced to addled idiocy, the caregivers had it much easier.

Those who think that such barbarities are a thing of the past had best think again. Many teens and young women are misled into thinking of abortion as a medical “quick fix,” just as a lobotomy was once considered to be. The developing child is referred to as “tissue” or “material,” the procedure itself as a “termination.” In the words of TeenWire, Planned Parenthood’s online teen magazine, abortion is “a very safe procedure. It’s about twice as safe as a shot of penicillin, and is 11 times safer than giving birth.” Abortion, the new miracle cure, will revolutionize our lives.

In fact, the cutting out of a human life from the embrace of its mother’s womb is a violent act, one that kills the baby and deeply wounds the mother.

The world will be a far better place when abortion joins ice-pick lobotomies in the medical museum of horrors.

These hard truths are kept from women until the damage is done. Women who have had an abortion tell a tale of barbarism, of medical incompetence, and excruciating pain.

In an online forum set up for post-abortion women called AbortionConcern.org, dozens of grim stories emerge. “I’ve had physical pain since the abortion, but nothing compared to the emotional pain,” says “Dale,” from Australia. “I felt awful,” says “Sophia,” from the United States. “I was crying and holding my stomach, and wanted to take everything back.” The stories are always the same, only the names and details change.

David C. Reardon, who has spent yeas researching just this subject, is the world’s leading expert on “post-abortion trauma.” This is a state, similar to the better-known Post Traumatic Stress Disorder suffered by thousands of war veterans, of severe depression and shock that countless women who have received abortions find themselves in.

The very existence of this condition is, not surprisingly, vehemently denied by organizations like the National Abortion Federation and Planned Parenthood. Thumbing their corporate noses at the extensive research conducted by Dr. Reardon and thousands of testimonials from the victims themselves, the National Abortion Federation blandly states that “mainstream medical opinions, like that of the American Psychological Association, agree there is no such thing as ‘post-abortion syndrome.’”

In these words, one can hear an eerie echo of Dr. Freeman’s insistence that his lobotomy patients were better off without those pesky brain cells.

Those who continue to pretend that abortion is a clean, painless, happy procedure are either ignorant of the medical facts, or choose to ignore them. Even well-known feminist Naomi Wolf, in a 1995 essay Our Bodies, Our Souls , has attacked abortion advocates for their hypocrisy. Though she was (and is) pro-choice, Wolf recognized that abortion is a violent, primitive, and unholy act.

“Clinging to a rhetoric about abortion in which there is no life and no death, we entangle our beliefs in a series of self-delusions, fibs and evasions,” she writes. “And we risk becoming precisely what our critics charge us with being: callous, selfish and casually destructive men and women who share a cheapened view of human life.”

An abortion is a barbaric act, fundamentally destructive to both baby and mother. It belongs in the medical museum of horrors, along with the leeches, the unnecessary amputations and, yes, the ice-pick lobotomies of an earlier age.