Why do so many environmentalists think that saving the earth means sacrificing the baby humans?

If asked what function the San Francisco-based Sierra Club performs, most of its 1.3 million members would probably reply “protecting the environment,” or “raising awareness of endangered species,” or words to that effect.  Yet, in their 2007 legislative report for Minnesota, the Sierra Club spent nearly 3 pages describing legislative initiatives that have virtually nothing to do with the environment.  Rather, this section deals almost exclusively with population issues or, to put it more accurately, with population control issues.

“Over 250,000 women need publicly supported contraceptive services in Minnesota,” the section’s first sentence urges.  It goes on to complain that “the President’s budget slashes funding for international family planning by $111 million, nearly one fourth of the FY 2007 funding level,” and criticizes Bush’s support for abstinence education.

This disturbing attack on life and family is only one example of a larger trend.  Over the past few decades, environmentalist organizations have adopted radically anti-natal stances, often with a dedication and ferocity that rivals Planned Parenthood.  Here are only a few examples of organizations whose definition of environmental responsibility necessarily includes population control. 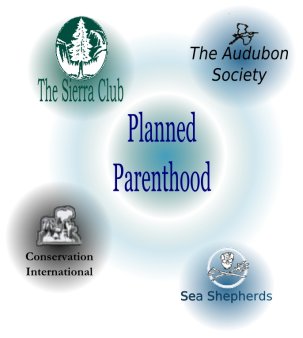 Over the past few decades, environmentalist organizations have adopted radically anti-natal stances, often with a dedication and ferocity that rivals Planned Parenthood.

The National Audubon Society recently released a 16-page document entitled “Population and Habitat: Making the Connection,” in which it baldly promotes the outdated and disproven “population bomb” mentality.  This document exhorts the United States to spend more money on international population control, insisting that “while the U.S. remains the richest nation on earth, we spend very, very little to help stem the tide of human population growth.” It makes no mention of the fact that the tide is cresting and will relatively soon be receding.

Paul Watson, president of the Sea Shepherd organization (and former Sierra Club board member), posts regular diatribes against population on his web site. In a May 4th editorial, he insists that human beings act “in the same manner as an invasive virus” on the earth.  “I was once severely criticized for describing human beings as being the “AIDS of the Earth,” he went on.  “I make no apologies for that statement.” 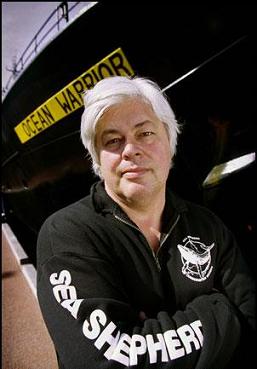 Paul Watson, president of the Sea Shepherd organization (and former Sierra Club board member) who once described human beings as the “AIDS of the Earth.”

Even local groups, set up to deal with parochial concerns, have jumped on the bandwagon.  The Clean Water Action Council of Northeastern Wisconsin claims on its web site that “Human population growth is the number one threat to the world’s environment” (emphasis in original).  It goes on to describe how “we need to limit our growth voluntarily, and promote contraceptive use, before Nature controls our population for us with famines, drought and plagues.  Our children’s future depends on us.”  The Council’s anachronistic statement completely ignores the reality of rising food production, and increasing per capita food consumption, worldwide.

Conservation International states that “addressing the issue of human population growth in and around the national parks and biosphere reserves . . . is essential for CI’s ultimate success in protecting global biodiversity . . . the Population Environment program seeks to reduce human impact and pressure on the limited natural resources in rural, biologically rich important areas.”  Think about this statement.  Not content with the vast tracts of land that have been set aside in national parks and biosphere reserves, this group now wants to prevent people from building homes near these areas.  How long before they begin promoting the idea that everyone should move to Texas?

Why do environmentalists consistently promote population control?   In part this is yet another holdover from the radical sixties.  Paul Ehrlich’s risible "population bomb" thesis lives on in the minds of these aging activists, whose remain in thrall to doomsday scenarios of total environmental collapse caused by burgeoning human numbers.  They remain oblivious to the countless demographic studies that have proven such fears baseless.

Another reason for their promotion of population control, I believe, is guilt.  Americans have been made to feel an enormous amount of guilt about the environment.  To be sure, our consumption of natural resources is in some ways irresponsible, and a certain amount of self-control in consumption is probably in order.  But the excessive "green guilt" suffered by many Americans goes well beyond the rational.  It is a guilt gleefully fueled by environmental groups, which have found that inventing ever-worsening crises and stoking green guilt, is good for business.  (Read Michael Crichton’s new novel, State of Fear, for a good–if fictional–description of how this fundraising scam works in practice.)

This is no secret.  Green guilt is openly acknowledged by these organizations, celebrated as a legitimate way to pressure people into following their agendas.  A pair of environmentalist professors, Paul R. Kleindorfer, and Ulku Oktem, said as much in a series of lectures quoted in an online article entitled “Guilt is Good: A New Approach to Environmental Problems”.  The two professors go on lecture tours extolling the power of guilt in pushing the environmentalist agenda.

But what do those who have been made to feel guilty about the space that they take up on the planet do?  They not only restrict their own fertility, they busily set about restricting the fertility–and the freedoms–of others as well.  As Joseph D’Agostino so aptly put it in his Weekly Briefing of February 2nd, they want everyone to become “eunuchs for the green kingdom.”

With global warming fears now in full bloom, these environmentalist organizations have been given a new lease on life.  Their anti-natal policies are gaining support among a guilt-ridden public.  The result?  A new generation of doom-politicians are seeking to expand these failed programs and policies.

Who will educate the wealthy, New York-based environmental groups, who raise money by preying on the fears of the gullible?  Who will educate Al Gore and Bono, whose audiences cheer their every outdated utterance?  These are the people who are behind the times—touting dated research, dated theories, and obsolete philosophies about overpopulation in a world where many countries are facing depopulation.

Environmentalists, save yourselves.  The rest of us are doing just fine.