The East African country of Tanzania suffers from many challenges, but overpopulation is not one of them. The subtropical country has a land area larger than California, Michigan, Arizona, and Virginia combined, and a population only about the size of California’s and Virginia’s combined.

But if you look at the website of USAID, the United States federal agency responsible for foreign aid, you might think that Tanzania was dangerously overpopulated. That’s how it justifies ignoring real health needs in favor of funding mostly drugs and devices to stop people from having children.

USAID might justify their statistics if the Tanzanian people were desperately pleading for more contraception. But they are not. Maybe the United States government could justify spending more on contraception than it spends on maternal health, child health, water, sanitation, nutrition, and tuberculosis combined  in one of the poorest countries in the world (GDP per capita is $1,700 per year[ix]). Yes, maybe it could justify its funding discrepancies if Tanzanian women wanted, more than anything, to stop having children. But they don’t.

Those who say that the women of Tanzania want boatloads of U.S. contraceptives point to the fact that the average Tanzanian woman has 5.4 children.[x] They are shocked that, despite this reproductive profligacy, the contraceptive prevalence rate is only 34%.[xi]

The primary reason that the women of Tanzania discontinue the use of contraception is to become pregnant. The second most common reason is that they dislike the way that contraceptive drugs and devices affect their bodies and their health. The third most common reason for discontinuing is that they are currently pregnant. Together, these three reasons total 70% of the reasons that Tanzanian women give for discontinuing the contraceptives provided by unwitting U.S. taxpayers.[xvi]

And the population controllers at USAID don’t like it one bit! How dare these women make their own reproductive choices, they seem to say. Why can’t they all be like Sandra Fluke, swallowing their free contraceptives without a qualm and demanding more?

The inability of USAID to shed its outdated notions of overpopulation would almost be funny if so many Tanzanian children weren’t dying in consequence. You would think that Obama, who styles himself an anti-imperialist, would be more sympathetic to the desires of the African people. Instead he has doubled down on reproductive imperialism, spending more money to abort, sterilize and contracept the African (and Asian and Latin American) people than ever before.

The next time he goes on an “apology tour” overseas, we suggest that he apologize for pushing abortion, sterilization and contraception on people who are crying out for clean drinking water, food, and basic health care. 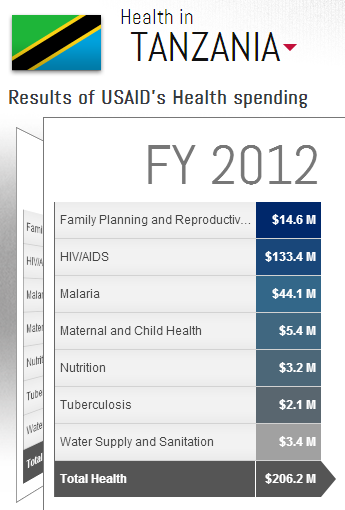 (Image is a screen shot from the USAID website)