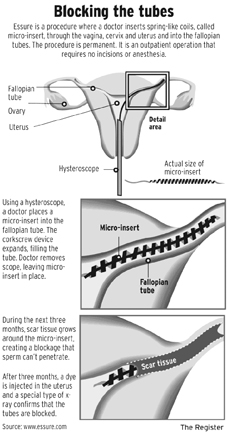 A diagram of the Essure Coil in action. (Insert: The OC Register. http://www.ocregister.com/newsimages/Graphics/2008/06/EssureBirthControl.gif)

You are looking at a so-called Essure Coil, the newest method of self-mutilation offered by the ever-inventive anti-baby types. The 1.5 inch-long device is designed to be inserted into the Fallopian tubes, where it irritates the lining and causes scar tissue to grow into and around the tiny coil. Within three months, the manufacturer promises, the Fallopian tubes will be completely impassable, both to sperm traveling up for their possible date with an egg, and to the tiny babies that result from conception traveling down.

For decades, the population controllers have been searching for ways to permanently sterilize women without subjecting them to surgery. After all, a tubal ligation involves entering the body cavity, exposing the women to the risk of infection and other complications. Quinacrine sterilization was originally seen as an improvement over surgery. In this form of sterilization, pellets of quinacrine hydrochloride were inserted into the uterus, where they dissolved into hydrochloric acid. The resulting chemical burn caused scar tissue to grow over the opening of the Fallopian tubes. In the end, the pain of the procedure, combined with the risk of infection and ectopic, or tubal, pregnancy—and a formal protest to the FDA by PRI—convinced the drug agency to step in and bar the practice.

So now we have barnyard sterilization, part three, which involves sticking a foreign object inside the Fallopian tube to scar it shut. The maker of Essure prefers to call the procedure “permanent birth control” rather than “sterilization” (which has such a negative connotation). Permanent it is, since unlike tubal ligation Essure cannot be reversed.

Essure is being marketed as a newer, cheaper, faster, scalpel-free alternative to having ones tubes tied. I predict, however, that it will suffer from the same kind of defects that doomed Quinacrine sterilization. The irritating presence of a foreign object may give rise to pain and infection. As the Fallopian tubes scar shut, conception may still occur, but the resulting pregnancy will be ectopic.

Do people really want to die for sex?