A Call to Action

In the most recent edition of his book, A Mother's Ordeal, Steven Mosher presents a riveting account of one woman's journey through motherhood in China under the one child policy. A Mother's Ordeal gives faces to the repressive population control policies of the People’s Republic of China and helps an outsider understand the excruciating dilemma it presents couples in China. 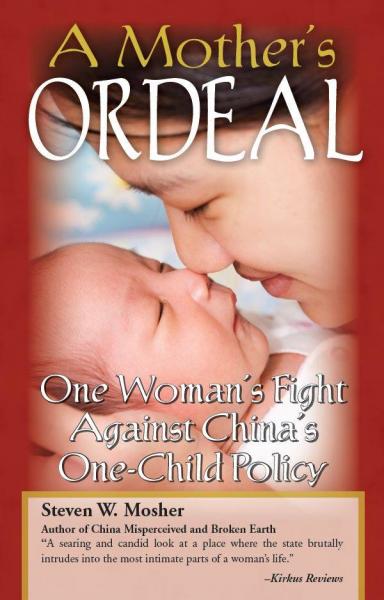 The book chronicles the life of a young and talented nurse, Chi-An, as she struggles to mesh the lofty promises of the Chinese Communist Party with the shocking realities of their policies. As a loyal member of the party and a medical professional, Chi-An initially did not question the logic and moral correctness of the one child policy. When her patients came in begging her not to terminate their pregnancies, Chi-An viewed them as traitors to the Communist party rather than as mothers.

It wasn't until Chi-An married her loving husband, Wei Xin, and she became pregnant with their first child that she began to question the merits of the policy. After being forced to abort her second child, Chi-An was devastated, but in need of a job, she took a position as a member of the population control unit at a factory. There she took out her anger and bitterness over the loss of her own child by coercing other young women to abort.

Chi-An’s decision to work as a population control officer, while shocking to many Americans, is understandable when seen in the context of Chi-An’s tenuous role as a lower class member of Chinese society. Having grown up during Mao’s Great Leap Forward and the Cultural Revolution, Chi-An knew that disagreement with the one child policy would not be permitted. The book provides a broader context for understanding the impact of communism on the individual and the expansive nature of control that such a regime possesses.

Through Chi-An’s story, Mosher sheds light on how the Chinese have engineered a system and maintained such tight control over the size of its population. In fact, it is through the use of average Chinese citizens like Chi-An, that the government has enforced compliance with the one child policy and aborted an estimated 336 million boys and girls.

Chi-An forced countless women to abort their babies. Making nightly calls to their home, isolating them from family and friends to force a decision, and ultimately leading them to end their pregnancies and be sterilized, all in the name of the Communist party. She too, had been solicited nightly by population control workers, and disdained their very presence. But now, due to societal pressure and necessity, she had become one of them.

Throughout the book, the reader is not just a bystander, but a participant in Chi-An's struggle to rationalize the policies of the Chinese government. The reader is asked to understand Chi-An's challenges as a mother grieving the loss of her unborn child, while simultaneously asked to comprehend the pressures that Chi-An faces to enforce the stringent quotas of the one child policy.

Chi-An's account of life in China arguably has greater credence because she was an insider. She bore witness to the newly aborted babies born fully alive and left to die in trash cans. She saw doctors crush the skulls of newborns before they exited the birth canal. Chi-An was, in many ways, an accomplice in all these acts. And yet, Chi-An was also a victim of the one child policy, having been pestered by population control workers and eventually forced to abort her own baby.

After Wei Xin secured a prestigious position to study abroad in the U.S., Chi-An was left as a single mother caring for her only child until she was afforded the opportunity to join her husband at the university. Upon her arrival in the States, she unexpectedly became pregnant with their third child. Much to Chi-An's chagrin, the Chinese government deemed that the one child policy applied to Chinese couples abroad and began pressuring her from China to abort her child.

Chi-An and her family were eventually granted asylum in America and allowed to keep their third child due to the persecution they faced from Chinese officials to abort. While Chi-An escaped the menace of the one child policy, not all Chinese women are so lucky.

A Mother's Ordeal encourages the reader to confront the brutal and raw reality of Chinese communism and forces the reader to ask himself how family matters ever became such an integral part of the government’s business. Short of China’s authoritarian context, the story provides a framework for discussion of government, and leads one to the conclusion that that a government’s role is to protect people’s liberties, not to create, define, or restrict them.

Most importantly, Chi-An's story is not a relic of the past, but a story of the present. Countless Chinese women daily face the pressure of the one child policy forcing them to abort their children and get sterilized.

A Mother’s Ordeal is as much a story as it is a call to action—a call to protect the rights of the unborn, to reflect on the proper role of government, and to be reminded of the suffering faced by modern women in China. While Chi-An’s story is a landmark case, the fight against the one child policy is far from over.

You can purchase A Mother’s Ordeal here.