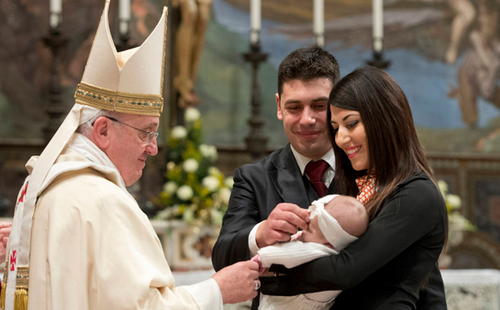 And the gender feminists, the population controllers, and the homsexual activists are not pleased

For some time these have been flaunted by homosexual activists who thought that the Pope was giving them a pass. But it turns out that Pope Francis was not about to change Catholic teaching on marriage and sexual morality.

The real Pope Francis first showed up at the World Meeting of Families in Philadelphia, where he defended traditional marriage and childbearing in no uncertain terms.

At the “festival of families” he spoke of how “of this woman, Mary, and of this man, Joseph, a family is created into which comes God.” Again in his closing homily, he emphasized “the word of the Lord [that] … invites all those who want to share the prophecy of the covenant of man and woman, which generates life and reveals God!”

Memo to the U.S. Supreme Court: Marriage is a covenant between man and woman, which generates life and reveals God!

Relationships between two people of the same sex, which do not generate life and thus reveal God–whatever else they may be–are not marriage.

Then at the United Nations he said this:

“Without the recognition of certain incontestable natural ethical limits and without the immediate implementation of those pillars of integral human development, the ideal of “saving succeeding generations from the scourge of war” (Charter of the United Nations, Preamble), and “promoting social progress and better standards of life in larger freedom” (ibid.), risks becoming an unattainable illusion, or, even worse, idle chatter which serves as a cover for all kinds of abuse and corruption, or for carrying out an ideological colonization by the imposition of anomalous models and lifestyles which are alien to people’s identity and, in the end, irresponsible.” [italics added.]

Anomalous, in Spanish, means abnormal. So what abnormal “models and lifestyles” is the Pope criticizing here? He’s referring to the push by the UN to impose gender ideology, abortion, population control, and homosexual marriage on countries and peoples around the globe. His shorthand for this agenda of death and dehumanization is “ideological colonization.”

The Pope’s message on marriage was further reinforced by his not-so-secret meeting with the courageous Kim Davis, the embattled Kentucky county clerk who was jailed for refusing to issue marriage licenses to gay couples.

The mainstream media, angered by the Pope’s obvious support for the county clerk, has tried to dismiss this as a “chance meeting.”

But this supposedly “chance meeting” was arranged by Archbishop Vigano, the Pope’s representative in the U.S., and took place at the Vatican’s own embassy in Washington, D.C., to which the Davises were transported by Vatican security. Kim was even asked to put her long hair up in a bun so that she would not be as easily recognizable. Does this sound like an accidental encounter to you?

As far as the meeting itself was concerned, the Pope offered specific words of encouragement to Kim Davis in her fight. According to Liberty Counsel, when the Pope came in the room he stretched out his hands to Kim and encouraged her to “stay strong.” He was obviously familiar with her case and wanted her to know of his prayers and support.

Finally we have Pope Francis’ address at the opening mass of the Synod on the Family, which constitutes a kind of coup de grace for those who thought that this Pope would fundamentally change Church teaching on marriage and divorce.

The Church’s role, he said, is “to carry out her mission in truth, which is not changed by passing fads or popular opinions. The truth which protects individuals and humanity as a whole from the temptation of self-centeredness and from turning fruitful love into sterile selfishness, faithful union into temporary bonds.

Covenantal marriages between man and woman are the very definition of fruitful love, since they are not transitory but permanent, and not sterile but open to life.

Sterile selfishness, on the other hand, is defined as contracepted sex, that is to say, by acts that are by definition sterile and thus selfishly turn inward upon themselves. This is true whether the contraception occurs through chemical, surgical, or biological means (as is the case with two women, for example). Such acts, which are not open to life, have no end outside of themselves.

The Pope went on to quote Pope Benedict: “Without truth, charity degenerates into sentimentality. Love becomes an empty shell, to be filled in an arbitrary way. In a culture without truth, this is the fatal risk facing love” “ (BENEDICT XVI, Caritas in Veritate, 3).

The media has deliberately misinterpreted the Pope’s compassion towards individuals struggling with marital or sexual problems as a harbinger of fundamental changes in Church doctrine concerning marriage and sexuality.

At the end of the day, however, this Pope, like the 265 popes before him, will defend the Truth. He will say, as Cardinal Erdo did on the first day of the Synod, that while people in same-sex relationships need to be treated with respect and sensitivity, their relationships have nothing to do with marriage. He will affirm that Catholic marriages are indissoluble, and that those who have remarried outside the Church should ask Our Lord to come to them in spirit, rather than receive the Eucharist.

In the end, the Rock will not roll.