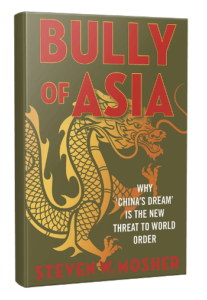 Get the Intro Free!

Why ‘China's Dream’ Is the New Threat to World Order

The signs are everywhere.

China unilaterally claims the entire South China Sea as sovereign territory, then builds artificial islands to bolster its claim. It suddenly activates an air defense identification zone over the East China Sea, and threatens to down any aircraft that does not report its position. It builds roads into Indian territory, then redraws the maps to show that it is actually Chinese territory. The People's Republic under President Xi Jinping is quickly becoming The Bully of Asia.

Steven W. Mosher is president of the Population Research Institute and an internationally recognized authority on China. He is also the author of numerous books on China, among them Broken Earth: The Rural Chinese, A Mother's Ordeal: One Woman's Fight Against China's One-Child Policy, and Hegemon: China's Plan to Dominate Asia and the World, as well as several edited volumes and hundreds of scholarly articles, editorials, and opinion pieces.

Learn more about the threat China poses to global security. With your donation of $25 or more to the Population Research Institute, we’ll send you a copy of Bully of Asia as our way to thank you in helping to end population control around the world.

See what others have said about
Steve Mosher's eye-opening book, Bully of Asia

"With mounting admiration, I have read Bully of Asia. Mosher's book is the most sophisticated, up to date, richly based argument in existence of dangers of the Rise of China - dangers to the giant's neighbors and to America."

— BILL GERTZ, author of The China Threat and War: War and Peace in the Information Age

“In this book, one of America’s most perceptive China watchers explains why China’s ‘Dream’ is the world’s nightmare. Will America wake up in time? It will, if it reads this book.”

“Bully of Asia is a wake-up call for Americans who assume that China plays by the same rules as other Countries.”

— DANNY TOMA, retired Foreign Service officer and author of the forthcoming America First: Why Everything You Know about Foreign Affairs Is Not Only Wrong, It’s UnAmerican