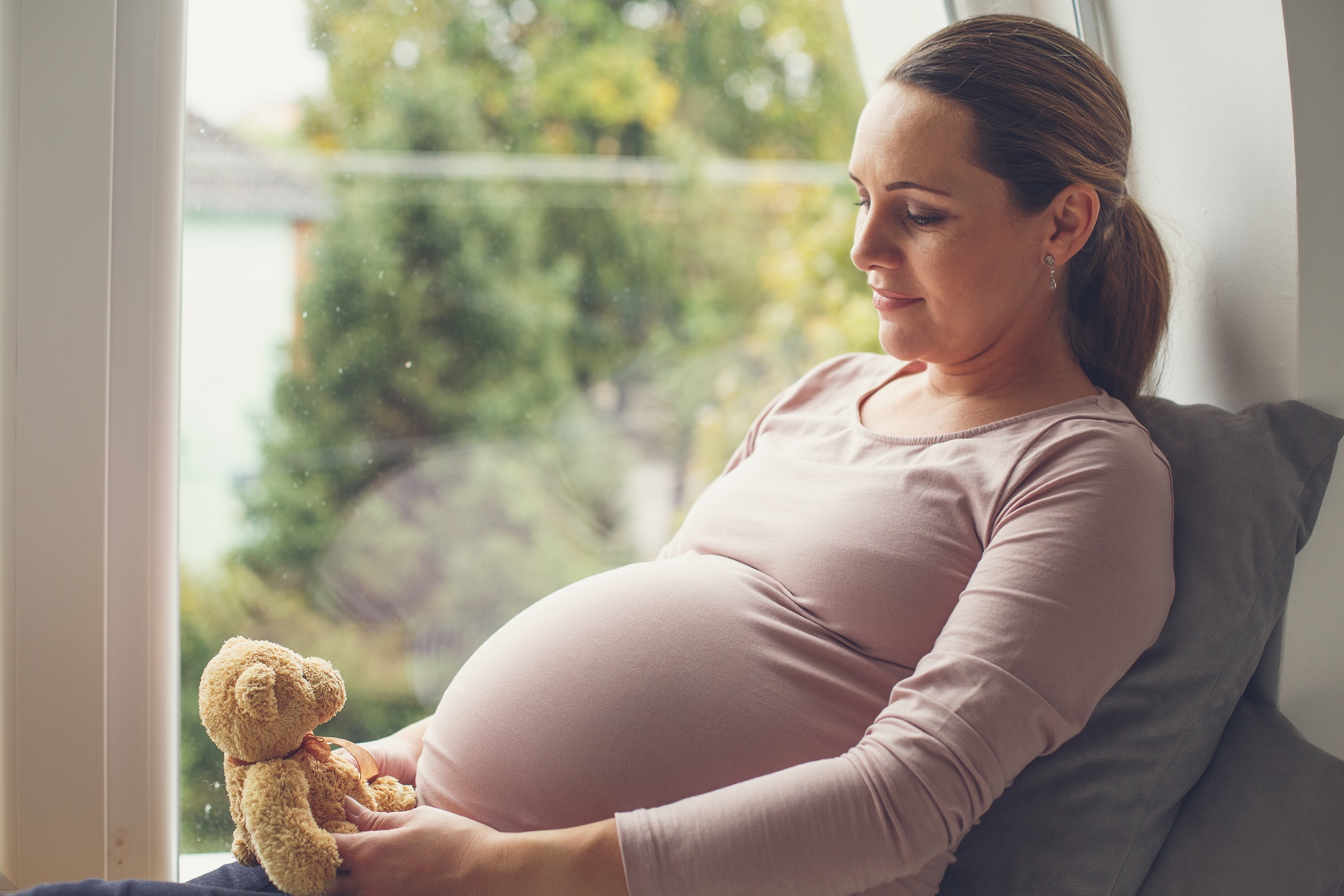 What can be done to reverse this ominous trend?

The last year of the Obama administration saw the fertility rate fall to an all-time low.

According to recent data from the CDC’s National Center for Health Statistics (NCHS), the U.S. fertility rate sank to a record low of 62.0 births per 1,000 women of reproductive age in 2016.

This was a slight decrease from the 2015 fertility rate which stood at 62.5. The downward trend is not showing signs of stopping either. According to NCHS preliminary estimates, fertility slumped even lower to 61.5 in the first quarter of 2017.

The Great Depression led to a staggering drop in fertility rates. 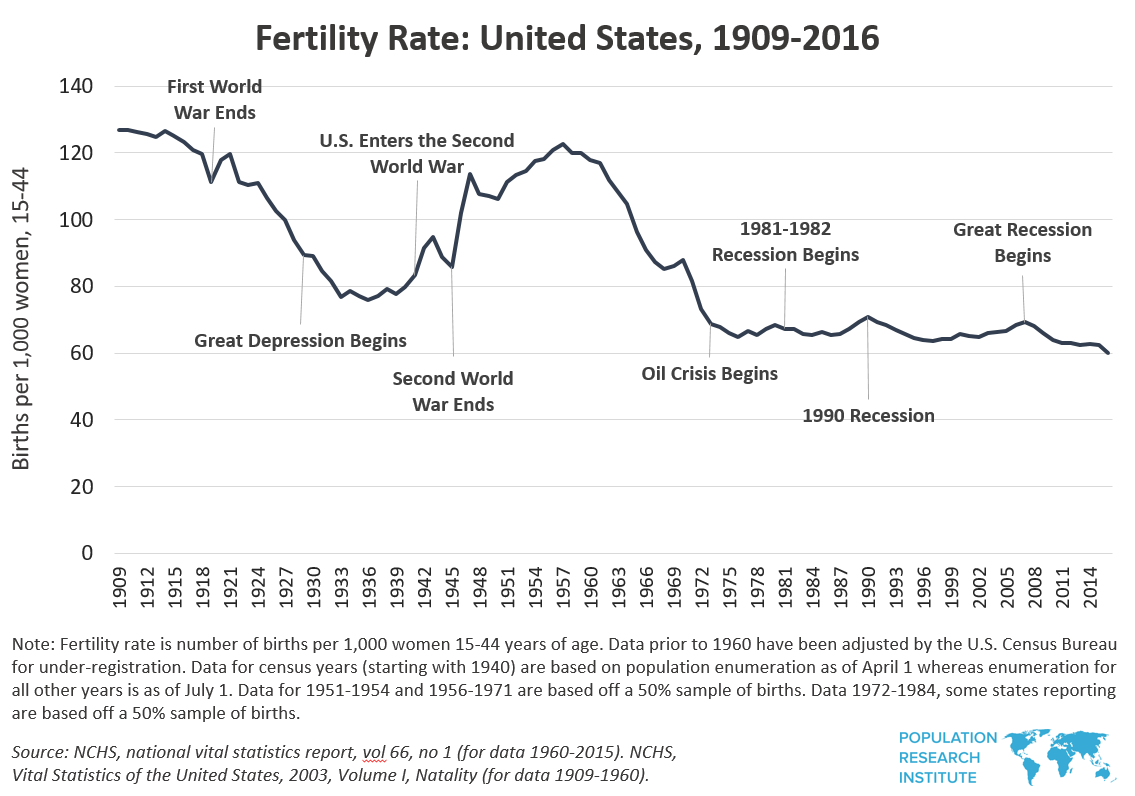 The current fertility decline is similarly driven by the still-lingering effects of the Great Recession of 2007.

Studies have shown that unemployment[1],[2] and employment uncertainty[3] adversely affect the birth rate overall and lead young people to postpone marriage. Both for male and female unemployment affects fertility, though the effect remains stronger for male unemployment.[4]  Fertility is also more likely to decline in developed countries when Gross Domestic Product (GDP) contracts.[5]

A decline in the birth rate has also been found to be linked with other economic indicators such as per capita GDP, per capita income, the number of first-time unemployment claims, and consumer confidence.[6]

The Great Recession has fallen particularly hard on young adults who play a major role in contributing to the overall fertility rate. Following the 2007-16 Great Recession (which is more accurately referred to as a second Great Depression), many young adults have struggled to enter the workforce, to find affordable housing, and to accumulate wealth, prerequisites necessary in contemporary American society for partnership and family formation.

The Great Recession has also fallen particularly hard on Hispanics, a demographic that, for the past few decades, has helped boost the fertility rate in the U.S. While non-Hispanic black and non-Hispanic white women have seen a modest decrease in fertility by 7.3 and 1.7 births per 1,000 women of reproductive age from 2007-2015 respectively, Hispanic women have seen a precipitous decline of 25.7 births per 1,000 women over the same time period.[7]

If birth rates continue to decline, and immigration drops off, the impact on the U.S. economy could be significant. Population growth, or more specifically, an increase in the labor force, is a key determinant of economic growth. Economists estimate that as much as one third of economic growth is attributable to workers being added to the labor force every year.

Low birth rates correspond to aging population.  The U.S. is facing a substantial increase in its dependency ratio as the Baby Boomers retire, and working-age adults must replace the productivity thus lost and pay for entitlement programs like Social Security and Medicare.

To maintain productivity, one solution is to work longer hours or to postpone retirement. But, given there are only so many hours in a day and only so many additional years the elderly can be expected to work, there is only so much lost productivity that can be compensated for in this way. Barring a major technological breakthrough to boost productivity and efficiency, demographic decline will almost certainly have a net drag effect on the economy.

Will birth rates rebound?  As the Great Recession recedes into memory, and as the Trump economic policies stimulate growth, birth rates will likely increase again.  They did, after all, following the Great Depression.

But the demographic recovery this time around is unlikely to be nearly as robust as it was during the Baby Boom. American society has changed. Fertility rates are unlikely to reach former levels because desired fertility goals in the U.S. overall have declined. 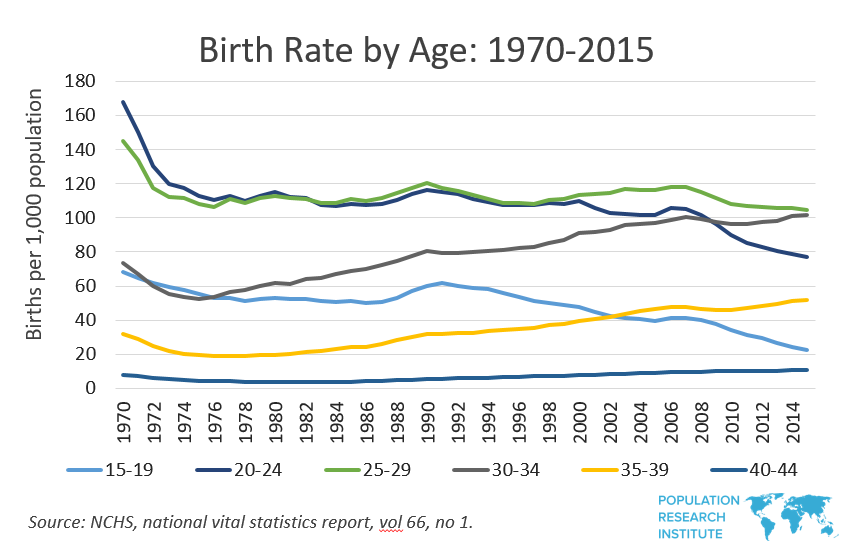 In recent decades, however, women have increasingly opted to postpone childbearing. The shift has been so consistent across the U.S. that the birth rate for women in the 30-34 age group has now surpassed the 20-24 age group. There are far fewer teenage brides than in years past, and more and more young women are choosing college over childbearing.

A more educated population is, of course, vital to continued economic growth.  But so is a healthy birth rate. Are young couples merely postponing childbearing until they are older and have completed their education.  Or are they foregoing it altogether?

It may be too soon to tell which way fertility will trend, post-Great Recession. While many couples initially seemed to merely postpone having children as when the downturn hit, recent fertility data seems to indicate that, as the Obama recession dragged on year after year, many ultimately revised their fertility goals downward. Couples who postponed births have generally yet to make-up for the loss, proving once again that fertility delayed is fertility denied.

The solution, in our opinion, is an expansion of the Child Tax Credit (CTC). Senator Marco Rubio has long advocated increasing the maximum credit from $1,000 to $2,500, as well as making it fully refundable. A fully refundable CTC would reduce the taxes of working families across the board.  This in turn would be a powerful inducement for them to have another child. After all, children are the only future a family—or a nation—has.