“There are three kinds of lies,” Disraeli once famously remarked. “There are lies, damned lies and statistics.” But we now know, thanks to the United Nations Population Fund, that there is a fourth way to lie as well: the Population Graph.

In the run up to its ominously entitled “Day of Seven
Billion,” the United Nations Population Fund has released a
preview of its State
of World Population Report 2011.

The preview opens with a graph of population over time that seems
to show the world’s population climbing ever higher in the
decades to come. In fact, the scaling suggests to the eye that the
number of people will more than double by century’s end.

The trouble with this graph is that it is, to put it bluntly, an
absolute fabrication. It is designed, I believe, to create the
impression that human numbers are spinning out of control. It is a
population bomb graph, if you will.

No demographer that I know of believes that our numbers will ever
double again.

In fact, not even the demographers at the UNFPA’s sister
agency, the U.N. Population Division, believe it. Their favored graph
looks like this: 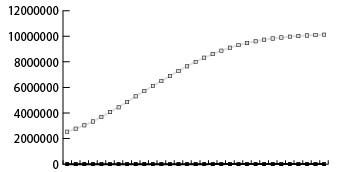 This projection shows the world’s population peaking at 10
billion by the last decades of the 21st century, not steadily climbing
to 13 billion and beyond.

While this is an improvement over the UNFPA’s population bomb
graph, even this graph significantly overstates future numbers. It
does so because the people counters at the UN Population Division
assume that fertility rates in dying countries will somehow surge to
2.1 children per woman.

Now why would aging and dying populations (e.g., the Russians, the
Italians, the Japanese, etc.) suddenly start having exactly
the number of children necessary to replace themselves. The UN
Population Division does not say.

Perhaps — I can only speculate — its demographers assume that
governments will put in place generous child allowances. But many
countries already have such allowances, and these have had only a
modest effect on fertility. Russia’s $13,500 baby bonus, for
example, has only increased the birth rate by 8 percent, too small a
percentage to offset Russia’s population decline.

In all probability, the future of humanity looks more like the UN
Population Division’s “low variant” projection. 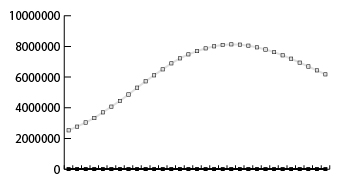 This shows population peaking around 2040 at 8 and a half billion
or so, and then beginning to decline. It assumes that birthrates,
which have been steadily falling for a century now, will continue to
fall. What could be more reasonable?

Our current economic chill is just the beginning of a long
demographic winter that will soon have much of the world in its deadly
grip.