Forty-eight pro-life organizations from across Latin America and Spain including PRI Latin America, have signed a letter thanking U.S. President Donald Trump for his pro-life leadership and for his administration’s commitment to defending the right to life on the international stage. The letter was signed by 49 pro-life leaders representing organizations in 16 countries including Honduras, Guatemala, El Salvador, Nicaragua, Panama, Venezuela, Ecuador, Colombia, Peru, Brazil, Argentina, Paraguay, Chile, Bolivia, Uruguay, and Spain.

Last week, immediately following the election, the Trump administration released three new pro-life regulations to help protect the conscience rights of American families and employers when purchasing health insurance. Each is aimed at undoing Obama-era regulations that were put in place in pursuit of implementing the Affordable Care Act (ACA).

This article originally appeared on One Peter Five https://www.pop.org/wp-content/uploads/2018/05/HV_Podcast-2_WB_China-Church-Under-Party-Control.mp3 On March 22, the Chinese Communist Party announced that all “religious affairs” in China would henceforth be supervised by a shadowy Party office called the “United Front Department.” The former government agency responsible for Catholic and other believers–the State Administration of Religious Affairs bureau (SARA)—has been summarily abolished. The reorganization attracted little attention outside of China, but it is certain to have unpleasant repercussions for Chinese believers. I believe that …

President Trump did us all proud on his Asia trip – at least those of us who are still prouder to be Americans rather than citizens of the world. He scored points by simply behaving like the leader of our nation and the free world. Read the full article on Fox News. 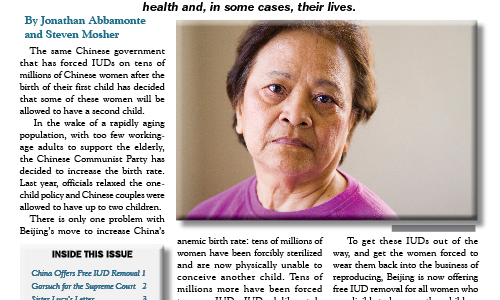 China Offers Free IUD Removal 1 Gorsuch for the Supreme Court 2 Sister Lucy’s Letter 3 Deeper Conversations 4 Our Most Pro-Life President? 6 Double Your Giving, it’s Free! 7 The Constitution Right Side Up 8 From the Countries 9 Empowering Women in Chile 10 Truth: More Than the Media 11 PRI in the News 12